It continues to be a Concept Duel format where you play a Deck based on an anime character’s theme/gimmick.

The update to the Decks are solely to Yuri: 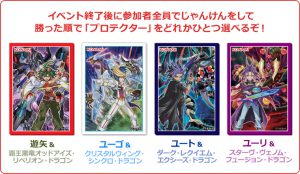 Each participant gets 20 sleeves of one of the above.

Later, after the end of the event, players will play Rock-Paper-Scissors. The winner gets to pick one of the above following four Sleeve themes.