These are the outlines of the most important changes of Master Rules 3!

1. An introduction to Pendulum Summons and the use of Pendulum Monsters.

This is a powerful Summon method using the Pendulum Scale that Pendulum Monsters have to summon several monsters in one strike!

Basically, they are monsters, however they can be placed in the Pendulum Zones and be activated as Spell Cards!
They have the Pendulum Scale necessary for Pendulum Summons! 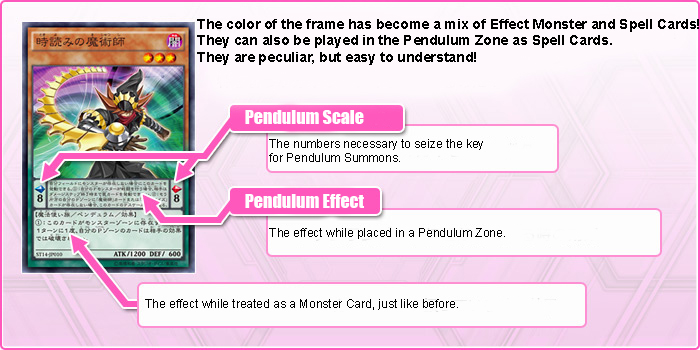 These are the Pendulum Zones!
By placing Pendulum Monsters in each Pendulum Zone on the left and right, you are ready to go!

Once you have Pendulum Monsters on each Pendulum Zone, you are ready to go!

Point 1
Placing a Pendulum Monster in a Pendulum Zone is treated as activating a Spell Card!
Also, they must be placed face-up! (It is not possible to set them face-down)

=> Since they are treated as Spell Cards, they can be destroyed by cards like Mystical Space Typhoon

A Pendulum Monster activated in the Pendulum Zone is treated as a Spell Card, and not as a monster.

=> They are not destroyed by cards like Dark Hole.

Pendulum Summons are Special Summons that happen on a single timing (simultaneously)!

=> Pendulum Summons can be negated by Solemn Judgment, and the monsters that would have appeared at that time are all sent to the Graveyard.

2. The first player not drawing cards.

For the turn of the player who goes first, the rule has been changed so that the Normal Draw performed during the Draw Phase is not performed.
It used to be very advantegeous to go first, but with this change will you choose to go first or second?

3. Coexistence of 2 Field Spell Cards active at the same time.

Previously: Only 1 Field Spell Card can exist face-up on both sides of the field in total.

4. Simplification of the names of Field Zones.

With the introduction of Pendulum Zones, some existing Zones have been renamed for simplicity:

5. A definition of 5 timings during the Damage Step.

Breakdown of the Battle Phase:

=> A step to perform the declaration that you are entering your Battle Phase.

=> A tep to perform an attack declaration by choosing an attacking monster and the attack target.

1 Start of the Damage Step
The timing while entering the Damage Step. Effects that activate “at the Damage Step” or “without applying Damage Calculation” or effects that modify the ATK/DEF or monsters can be activated.
(Face-down Defense Position Monsters have not been flipped face-up at this point.)
Card examples: “Ally of Justice Catastor”, “Sasuke Samurai”, “Honest”, “Rush Recklessly”, “Shrink”, etc.

2 Before Damage Calculation
The timing before entering Damage Calculation. Face-down Defense Position monsters become face-up at this time.
(Effects that activate by flipping the monster face-up are not activated yet)
Effects that activate “at the Damage Step” can be activated at this point.
In most cases, this is the last timing to activate effects that modify the ATK/DEF of monsters.
Card examples: “Drillroid”, “Ehren, Lightsworn Monk”, “Honest”, “Rush Recklessly”, “Shrink”, etc.

5 End of the Damage Step
The timing where monsters destroyed as a result of Damage Calculation are sent to the Graveyard. Effects that are activated “when this card is destroyed in battle” are activated at this point.
Card examples: “Giant Rat”, “Jurrac Guaiba”, etc.

End Step (same as usual)
=> A step to perform the declaration that you are ending your Battle Phase.

There is also a column about the simplification of Japanese OCG texts, but if you can read OCG texts then you probably don’t need this article anyway, right?