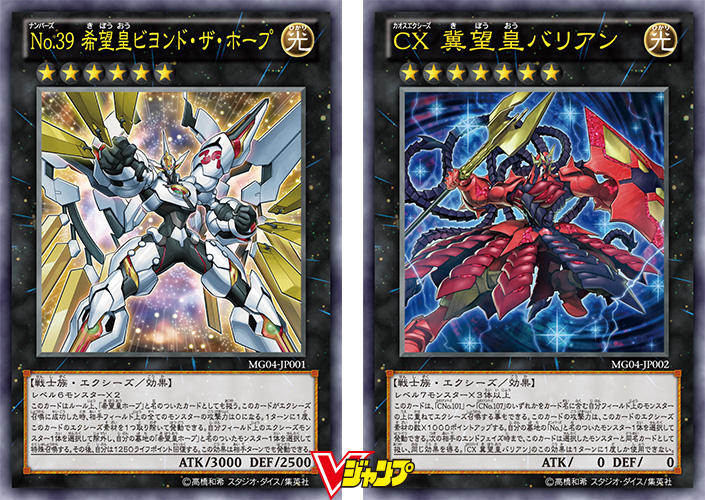 MG04-JP001
Numbers 39 Kibouou Beyond the Hope
Number 39: Beyond the Hope
Light Warrior / Xyz / Effect
RK6 3000/2500
2 Level 6 monsters
(This card is treated as a “Utopia” card.) When this card is Xyz Summoned: Change the ATK of all monsters your opponent currently controls to 0. Once per turn, during either player’s turn: You can detach 1 Xyz Material from this card, then target 1 Xyz Monster you control, also target 1 “Utopia” monster in your Graveyard; banish the first target, and if you do, Special Summon the second target from your Graveyard. Then, you gain 1250 Life Points.

MG04-JP002
Chaos Xyz Kibouou Barian
CXyz Barian
Light Warrior / Xyz / Effect
RK7 0/0
3 or more Level 7 monsters
You can also Xyz Summon this card by using any number of “Number C” Xyz Monsters you control, whose number is between 101 and 107, as the Xyz Material, (Xyz Materials attached to those monsters also become Xyz Materials on this card.) This card gains 1000 ATK for each Xyz Material attached to it. You can target 1 “Number” monster in your Graveyard; until your opponent’s End Phase, this card’s name becomes that monster’s, and it gains that monster’s original effect. You can only use this effect of “CXyz Barian” once per turn. 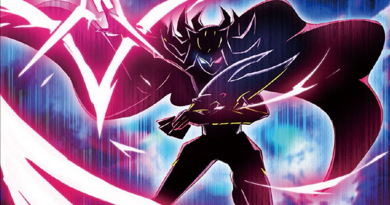 [DP26] Full Spoiler for Duelists of the Abyss 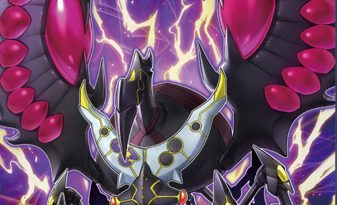