With some recent research, it comes to our attention there is a more specific naming pattern that the Metalphosis generally share. And we shall be diving into it, today. 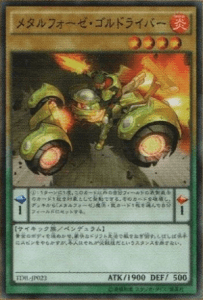 The Main Deck / Pendulum Metalphosis are named after existing metals found in nature (or normal alloys you can make in real life). Most of these are obvious, but one of them is a bit of a word-play and we’ll delve into that.

Obviously Goldriver, Steeleren, and Silverbird are named after Gold, Steel and Silver. Steel of course being a refined alloy of Iron.

So where does Volflame fit in? Its name works on a very coy way of mixing how the Japanese and Germans pronounce word. Specifically while this card is quite volcanic/fire themed, it takes its name from the metal known in Germany as “Wolfram”. Which is better known chemically to some as Tungsten.

Now why would Volflame and Wolfram be similar? Well, in German, the letter W is pronounced with what English speakers know as a V sound. (So it may very well be Wolflame, but that might be a discussion down the line).

Tungsten is often used for both electronics and its very hard nature means it’s used to reinforce the strength of alloys.

But where does that leave the Fusion Monsters? 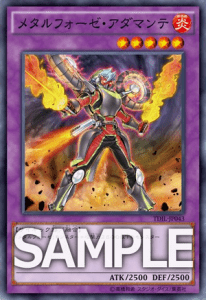 This is where the Org might of lapsed somewhat, as the naming pattern kind of took us by surprise:

Each of the Fusions are named after a fantastical metal or ore that doesn’t exist in the real world! All three of them in fact.

The Level 5 Metalphosis Adamante is named after Adamantine, a sort of metal or gem described in Greek lore and the like, referring to generally any hard substance (and equated later on with Diamond). Naturally, of course, since Diamond came to be the term for the hardest rock on the planet, Adamant or Adamantine fell into a more poetic and metaphorical usage (and used to refer to super hard metals/substances in RPGs and Tabletops)

Orihulk is more likely Orichalc or something to that extent. Orichalcum brings to mind the Orichalcos of the “Waking the Dragons” arc fame, and it should. Orichalcos is based on the word Orichalcum, a mythical metal attributed to Atlantis. The word “Orichalcum” comes from the Greek words Oros  (Mountain) and Chalkos (Bronze/Copper). It was described in Plato’s Critas as being the second most valuable metal in Atlantis, just behind Gold.

If there was a real Orichalcum, it was potentially a Copper-Zinc alloy used as an older ignot, that might of fallen out of use, based on a wreckage found near Sicily in 2015. 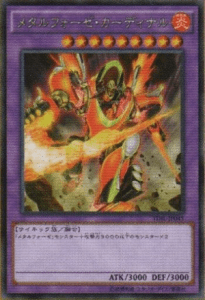 So where does this leave Cardinal? He’s more of an obtuse naming, as it refers to a metal that exists only in modern Japanese folklore. Not ancient.

Specifically, Cardinal likely refers to ヒヒイロカネ/緋々色金 (Hihi-Iro-Kane), an ore spoken of in the Takenouchi Documents, a group of documents considered to be psuedo-scientific hoaxes speaking of a great ancient Japanese empire that spanned the world.

The metal is said to be an Adamantine like ore, nearly indestructible and rust proof, and a conductor of heat, and has some sort of relation to souls and emotions, depending on the author.

So why Cardinal? Likely the deep red color, though why not Crimson or Scarlet is a good question. It should be noted that Square Enix commonly translates this magical ore as Scarletite and the word Scarlet is regularly tied into Jack Atlas’ Red Dragon Archfiend cards.

So there you have it. The Pendulums are natural metals, while the Fusions are mythical/legendary ores. Perhaps we’ll see some sort of Metalphosis Mythril in the future? Let’s wait and find out.