So many of you are wondering why there aren’t more spoilers for Legacy of the Valiant, well, Konami and Shueisha have finally revealed why… 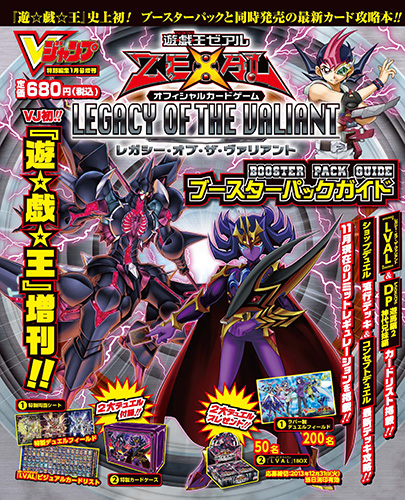 On sale November 16th, the same time as the set is officially released, the book will include:

– Limit Regulation List for November 2013 onwards. (Limit Regulation is the new name for the Japanese Forbidden & Limited List at official shops.)
– A Card List of the cards from Duelist Pack: Yuma 2, Duelist Pack: Kamishiro Siblings and Legacy of the Valiant.
– Pre Constructed Deck Lists for Shop and Concept Duels.

The guide also comes with a walkthrough explaining how to use the new cards from Legacy of the Valiant (with gems such as “Oracle of the Sun” plus “Inferno Reckless Summon” to make Number C101: Silent Honors Dark Knight).

The Book also contains a paper mat of the 3 Bujintei Emperors, a Deck Case of Dark Knight and the Barian Emperor, Nasch, both from the latest episodes of Yu-Gi-Oh! Zexal.

Finally, the books come with an application for a raffle from Shueisha, where 200 people will be able to get a Shark and Rio themed Rubber Mat, and 50 people will get a sealed box of “Legacy of the Valiant”.