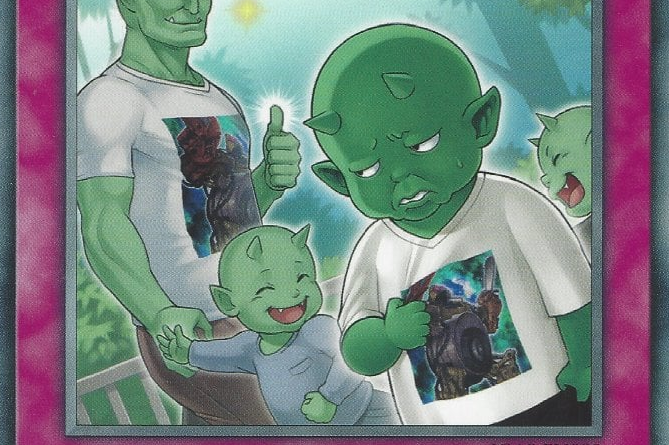 “That one kid” that we all know.

[NOTE: There are some references to traditional events held in Japan. A small clarification for these will be written in brackets like this]

The daily life of a somewhat unlucky goblin boy

He looks just like your average goblin boy. However, he is troubled by just “having it a little worse” than everyone else.
Let’s follow that boy around in his daily life and take a peek into these misfortunes.

“I really did not want this, but it’s hard to say it out loud”

Today is a celebration. The gift exchange that everyone can enjoy together…or so it should have been, but all he got was this extremly lame t-shirt.
His expression conveys his frustration. 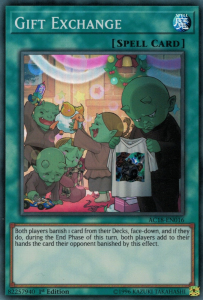 “What I really wanted was a Geargia toy”

“For some reason, only I got the broccoli” 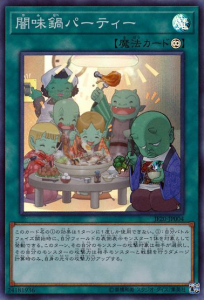 [As we mentioned before, a “yaminabe” (“dark nabe/pot”) is a hot pot dish where everyone throws ingredients into the pot without others knowing, then everyone takes ingredients at random. The card name writes “yaminabe” as “darkness-flavored nabe” (adding the word “flavor” to the usual word)]
The traditional darkness-flavored nabe of the Goblins where all sorts of things are thrown into the pot. Of all the chosen ingredients, he ended up with a broccoli that got mixed in among the chaos. He was almost sure it was meat.
“The fact everyone else got their favorite food is very sad.” 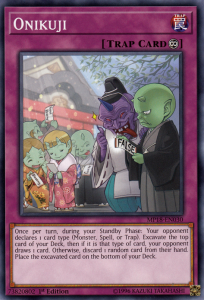 [Omikuji are fortune slips that predict the luck of the person for the upcoming year. They range from very good blessings, regular good/bad fortune, and progressively worse curses). The card name is a pun on ‘oni’ (ogre, but in this case closer to goblin), and the word omikuji]
The boy tries his luck with fortuen slips at the start of the new year. While his friends are having a blast comparing their “blessing” and “curse” results, he looks at his slip only to find…wait what the heck is “FALSE”?
“If I got at least a ‘curse’, I could be having fun with my friends.”

“Even though I am an oni, the beans are my friends” 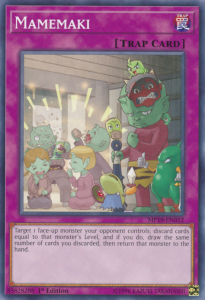 [During setsubun, it is customary to throw beans at a person dressed as an oni, which is obviously a very unfortunate role but apparently meaningful to goblins. ‘Mamemaki’, the name of the card, is the name for this custom. Again, an ‘oni’ is usually an ogre or demon, but a small oni can be what we call a ‘goblin’]
Mamemaki is a very important event in which you can play the role of an adult oni. The boy eagerly wore his costume, but for some reason the only ones excited about it are bean monsters.
“The other kids are ignoring the mamemaki and having a blast on their own.”

“Isn’t my ladle way too thin?”

[Goldfish scooping is a festival game in which you try to scoop fish with a somewhat fragile paper ladle. The card name replaces “scooping” with “rescue”, which are read the same (sukui)]
The eagerly awaited goblin festival. He tried the goldfish scooping challenge in very high spirits, but no matter how many times he tried, he never succeeded. He ended up using all of his allowance…
“Goblin Calligrapher looks at him with pity”

About the other characters that show up around the goblin boy 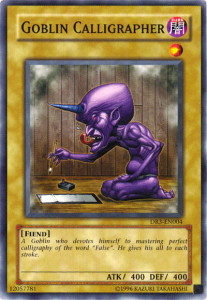 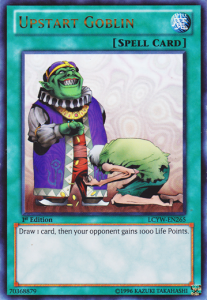 There are plenty of unique residents of the goblin town in addition to the goblin boy like “Goblin Calligrapher” or “Upstart Goblin”. Aside from these, there’s also many violent ones like the “[Goblin] Attack Force”. It seems that much like human society, if there are some good guys, there’s also got to be some bad guys. 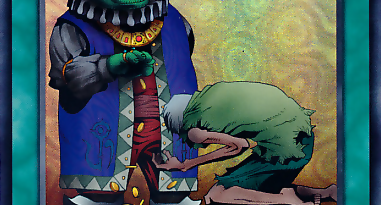