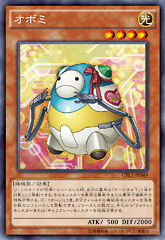 As well, during the second part, let’s introduce a card reprinted in “Sturcture Deck -HERO’s STRIKE-”!

Lillybot
(LIGHT Machine-Type ATK 500/DEF 2000)
Tribute any number of Machine-Type monsters on your field and then Special Summon that many “Photon” and/or “Galaxy” monsters from your hand! Also, when this card is Normal Summoned or flipped face-up,you can Special Summon an “Orbital 7” in your Graveyard in either face-up Attack Position or face-down Defense Position! You can use Orbital 7’s effect to add a “Photon” or “Galaxy” monster to your hand, and then use Lillybot’s to Special Summon it! Also, Orbital 7 and Lillybot both have 500 ATK so you can pull off a powerful combo with them using “Machine Duplication”! Which will open up all sorts of possible moves!

Bottomless Trap Hole
(Normal Trap Card)
This card can be activated when your opponent Summons a monster with 1500 or more ATK, allowing it to destroy and banish that monster. It’s a powerful Trap Card that really needs no introduction. Since it’s a non targeting effect, if 2 or more monsters are Special Summoned at the same time, all monsters among them with 1500 or ATK are destroyed and banished! This is a chance to get your hands on a card that can be used in a ton of various Decks!