It’s another former Korean World Premiere! And this one is going to blow your whole world away 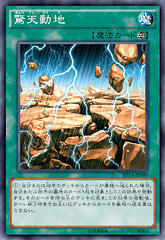 驚天動地
Continuous Spell Card
When a card(s) is sent from your Deck or your opponent’s Deck to the Graveyard: Target 1 card in either Graveyard; shuffle that target into its owner’s Deck, also neither player can send cards from their Deck to the Graveyard for the rest of this turn.

The Japanese Official Website recommends using it to stop cards being sent to the Graveyard by Mathematician, such as “Felice, Lightsworn Archer”