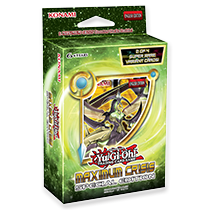 No specific details mentioned as of yet but we’ll keep you guys informed of any further updates.

Pendulum Summoning will undergo its final evolution in Maximum Crisis with a pair of Pendulum Monsters with Scales of 0 and 13, opening up the ability to Pendulum Summon monsters of any Level in any Deck! But that’s not the only type of Summoning that’s evolving. Following up on February’s Fusion Enforcers set, Maximum Crisis introduces a new Fusion Summoning Spell Card that lets you keep your Fusion Monster while giving back the monsters you just fused together!

With two guaranteed variant foil cards in each Special Edition box, plus the 27 cards from the 3 booster packs, Maximum Crisis Special Edition is a great way to power up your current Deck, or build a whole new Deck, for less than it would cost to buy 3 individual booster packs!