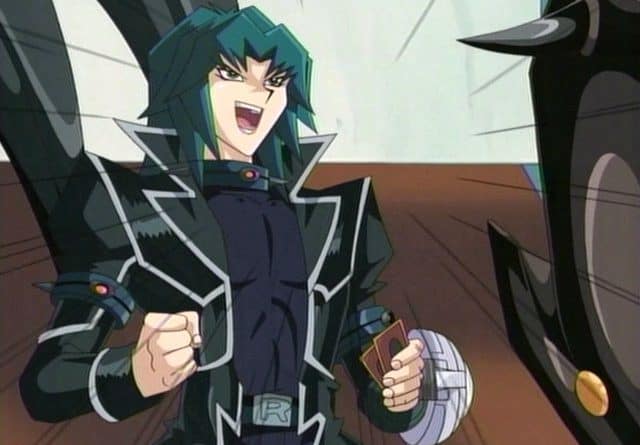 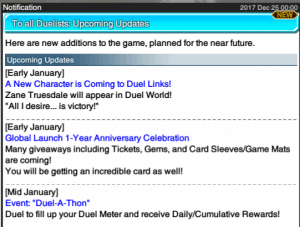 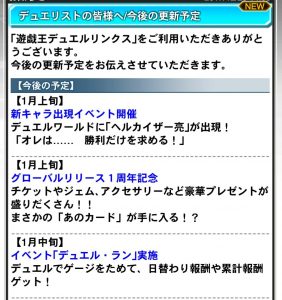 Also for Early January 2018, Konami is doing a major giveaway with Tickets, Gems, Card Sleeves and Game Mats, and players will be getting a certain incredible card to boot.

Mid January will be a Duel-A-Thon where you can keep Dueling to fill up your Duel Meter and receive rewards such as Gold, Gems, and Cards. 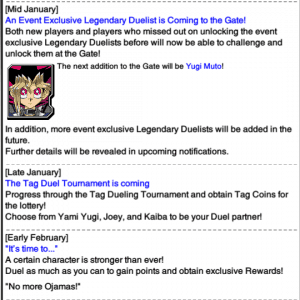 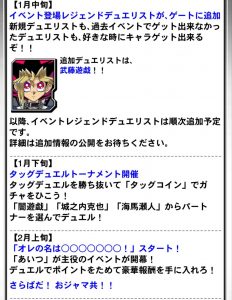 Mid January has Yugi Muto arriving at the Gate. Formerly Yugi could only be acquired through the Duelist Chronicles’ Duelist Kingdom Event. Of Note, Yugi has the Spell Card, “Union Attack” as a drop card, which is vital for ‘farming’ many characters in the game. (i.e. getting the maximum number of Gems and Cards from a Duel)

Late January will be a Tag Duel Event in which you can obtain in a Tag Duel Tournament and obtain Tag Coins via Lottery. Pick Yami Yugi, Joey or Kaiba as your Tag Partner.

Early February is new Event centered on a character who uses Ojamas, who won’t be using them for this event. And it’s implied to be a “Super Joey” sort of event. So, likely Chazz going full ham. Of which question, what could he possibly be using if he’s throwing away his Ojamas. 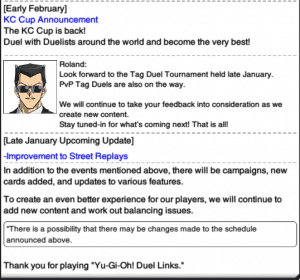 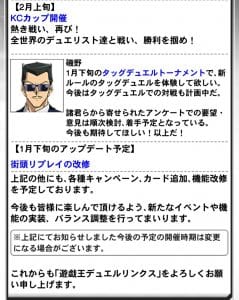 Early February will be a new round of the KC Cup.

There will also be an introduction of PvP Tag Duels.

Also in Late January is an update to Street Replays.

And various campaigns, new cards and general updates will be made to the game