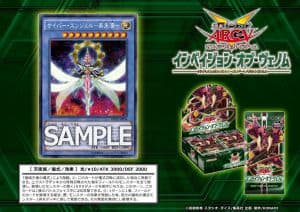 Cyber Angel – Vishnu
Level 10 LIGHT Fairy-Type Ritual Effect Monster
ATK 3000
DEF 2000
You can Ritual Summon this card with “Machine Angel Ritual”.
(1) If this card is Ritual Summoned: You can destroy as many monsters your opponent controls as possible that were Special Summoned from the Extra Deck, and if you do, inflict 1000 damage for each monster destroyed. This card can attack twice during each Battle Phase this turn.
(2) Once per turn, during either player’s turn, when a card or effect is activated that would destroy a card(s) on the field: You can return 1 Ritual Monster from your Graveyard to your Deck; negate the activation, and if you do, destroy that card.