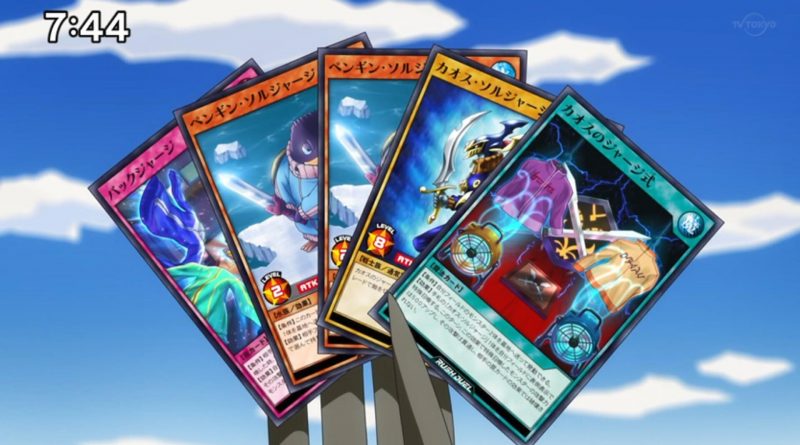 You know the deal: Not confirmed for release 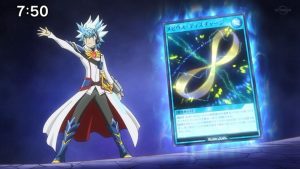 メビウス・ディスチャージ Möbius Discharge
Normal Spell Card
[REQUIREMENT] You can activate this by sending cards from the top of the Deck to the GY equal to [The number of face-up Normal Monsters on the field].
[EFFECT] Choose 1 face-up monster your opponent controls, it loses 200 ATK x [The number of cards sent to the GY by this effect] until the end of that turn. 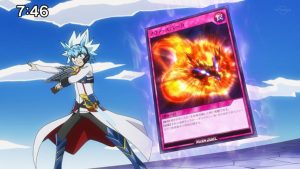 ノヴァ・スパーク Nova Spark
Normal Trap Card
[REQUIREMENT] When your opponent Special Summons a monster, you can activate this.
[EFFECT] Choose up to 3 Galaxy Normal Monsters from your hand and Special Summon them to your field face-up.

George Jersey, the villain of the week, uses a group of monsters that are all based on monsters that had Soldier in their name, except here, by tacking on ジ, they have become Soldjersey. So basically a deadly serious comedy gag theme. 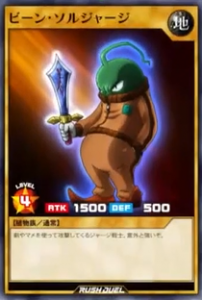 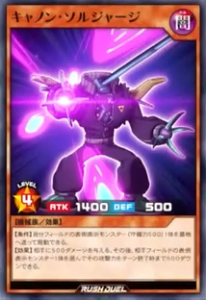 キャノン・ソルジャージ Cannon Soldjersey
Level 4 DARK Machine Effect Monster
ATK 1400
DEF 500
[REQUIREMENT] You can activate this by sending 1 face-up monster with 500 DEF you control to the GY.
[EFFECT] Inflict 500 damage to your opponent. Then, choose 1 face-up monster your opponent controls, it loses 500 ATK until the end of the turn. 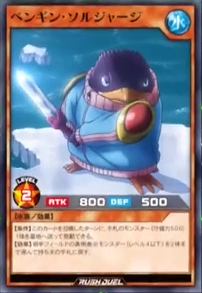 ペンギン・ソルジャージ Penguin Soldjersey
Level 2 WATER Aqua Effect Monster
ATK 800
DEF 500
[REQUIREMENT] During the turn this card is Normal Summoned, you can activate this by sending 1 monster with 500 DEF you control to the GY.
[EFFECT] Choose up to 2 Level 4 or lower face-up monsters your opponent controls and return them to the owner’s hand. 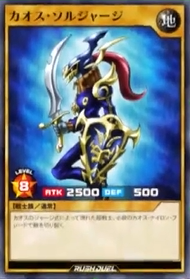 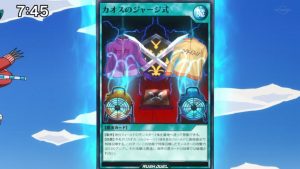 カオスのジャージ式 Chaos no Jersey-shiki (Chaos Jersey-tual/Black Luster Jersey-tual)
Normal Spell Card
[REQUIREMENT] You can activate this by sending 2 monsters you control to the GY.
[EFFECT] Special Summon 1 “Black Luster Soldjersey” from your hand face-up to your field. During this turn, the monster Special Summoned by this effect gains 500 ATK, its attacks inflict piercing, and it cannot be destroyed by the effects of Trap Cards. 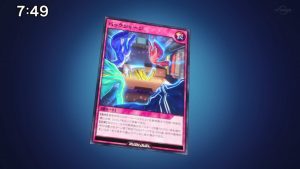 バックジャージ Backjersey
Normal Trap Card
[REQUIREMENT] When your opponent Normal or Special Summons a Level 5 or higher monster face-up, you can pay 500 LP.
[EFFECT] Choose 1 of your face-up monsters with 500 DEF, it gains 500 ATK until the end of the turn. Then, you can shuffle up to 5 monsters from your opponent’s GY back into the Deck.

Note: This card is a play on Back Charge. 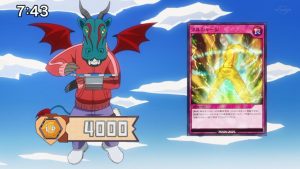 フルジャージ Fulljersey
Normal Trap Card
[REQUIREMENT] When your opponent’s monster declares an attack, you can pay 500 LP to activate this.
[EFFECT] All face-up monsters you control with 500 DEF gain 500 ATK until the end of the turn.

Note: This card is a play on Full Charge.