New Card Introduction (of cards from CPD1)! “Comic Hand” appears along with cards that make “Toons” even stronger!

“Collector’s Pack: Duelist of Destiny” (CPD1), which goes on sale May 16th, makes Toons even stronger! And among then is “Comic Hand”, an Equip Spell Card used by Pegasus in the “Yu-Gi-Oh! GX” TV series that’s been turned into a real Official Card Game card! Also, along with “Toon Ancient Gear Golem” and “Toon Kingdom” which we introduced on the Product Page, this pack has a ton of cards meant to help strengthen “Toon” Decks! 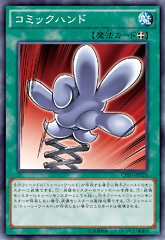 Comic Hand
[Equip Spell Card]
Equip only to an opponent’s monster while you control “Toon World”.
(1) Gain control of the equipped monster.
(2) It is treated as a Toon Monster, and can attack your opponent directly if they do not control a Toon Monster.
(3) If there is no face-up “Toon World”, destroy this card.

“Comic Hand” lets you seize control of your opponent’s strongest monster, and instantly turn the Duel around!! Also, the later introduced “Toon Kingdom” serves as extremely potent Toon support with its effect, but it’s also a Field Spell whose effect treats its name as Toon World! It becomes super easy to break out a combo that drops more and more “Toons” onto the field!

A Minor Introduction To Some Of The Theme’s Cards!
We’re going to give a minor intro to some related cards also included in “Collector’s Pack: Duelist of Destiny” (CPD1)!

Toon Kingdom
[Field Spell Card]
This is a super powerful Field Spell Card whose 4th Effect helps Toons, due to its name being treated as “Toon World”! However, of particular intestst is its second effect, which protects the Toon Monsters you control. It prevents your opponent’s effects from targeting your Toons, while it also has an incredibly powerful effect that lets you banish the top card of your Deck face-down in exchange for preventing your Toons from being destroyed by battle or card effects!
(Keep in mind that when you activate this card, you must banish the top 3 cards of your Deck face-down.)

Toon Ancient Gear Golem
[Toon/Effect ATK 3000/DEF 3000]
Just like “Ancient Gear Golem”, if this card attacks, your opponent can’t activate their Spells or Traps, and if it attacks a Defense Position monster, this card’s effect lets it deal piercing battle damage (where damage is inflicted if a monster has more ATK than the DEF of a Defense Position monster)! For those familiar with the effects of Toons, this card can’t attack the turn you call it forth and it can attack directly, but it isn’t destroyed if “Toon World” is obliterated, so make note of this guy, as that last effect makes him an important card!

Also, check out “Clash of Rebellions” (which comes out April 25th), as it contains at least one more “Toon” card!

Toon Cyber Dragon
[Toon/Effect ATK 2100/DEF 1600]
Just like “Cyber Dragon”, if you control no monsters and your opponent controls a monster, you can use this card’s effect to Special Summon itself from the hand! And just like “Ancient Gear Golem”, it has one of the fundamental effects of Toon Monsters, the fact it can’t attack the turn you bring it out, along with the effect that lets it attack directly, but it won’t be destroyed if “Toon World” is destroyed, make it an easy contender for being central to your Deck!

There even more cards besides these that bolster the power of “Toon” Decks everywhere that’ll appear! Imagine what kind of Deck you can make before it’s too late!