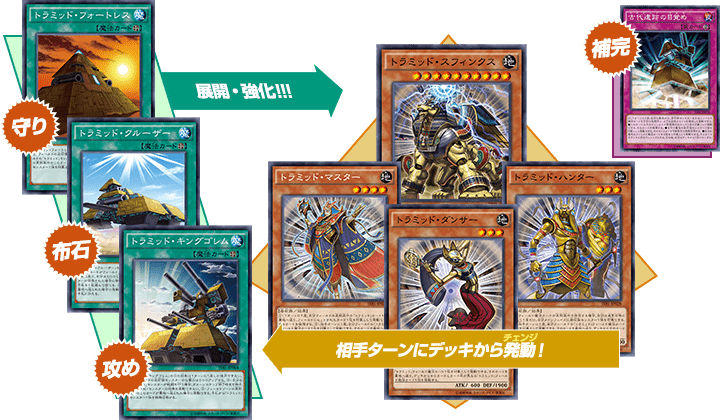 The “Tramid” Field Spell Cards, strongly support the moves of the “Tramid” Deck with their effects that activate in the Graveyard! And the 3 Level 4 or lower “Tramid” monsters, have effects to swap out your “Tramid” Field Spell during your opponent’s turn, letting you swap out for the situation you need the for “Attack”, “Defense”, “Preparing”, while you can use their effects in the Graveyard to make further moves!

Aim to Special Summon the Deck’s ace monster, “Tramid Sphinx”, and go for a explosive attack!

Let’s check out the characteristics of the “Tramid” included in “The Dark Illusion” (on sale April 9th, 2016)! 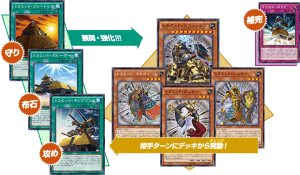 Here We’ll Introduce The 4 “Tramid” Monsters! Let’s check out their Ace Monster and the three monsters which possess effects that support the development of the “Tramid”!

The Monsters With Effects To Control The “Tramid” Field Spells

The 2nd effect of these three are all the same effect! They support powerful combos with Field Spell Cards!

Because this effect can be activated during the opponent’s turn, you can choose which “Tramid” Field Spell Card to activate based on your opponent’s tactics!

Tramid Hunter
[ATK 1400/DEF 1100]
During your Main Phase, if there is a face-up Field Spell Card on the field, you can Normal Summon 1 Rock-Type monster in addition to your Normal Summon/Set. (You can only gain this effect once per turn.) Once per turn, during your opponent’s turn: You can target 1 “Tramid” Field Spell Card you control; send it to the Graveyard, and if you do, activate 1 “Tramid” Field Spell Card from your Deck with a different name from that Field Spell Card (this is a Quick Effect).
[⇒ If you use its first effect to follow up with a Summon of “Tramid Dancer” to use Dancer’s first effect, this card’s ATK becomes 1900! Because it’s the kind of card you’ll want to keep in place based on its (2) effect and its potentils for combos, don’t immediately use two of them for an Xyz Summon!]

The Ace Monster Appears! It Appears To Destroy Whatever Destroyed As “Tramid”!!

The three “Tramid” Field Spell Cards each have 3 effects. Their first effect support Rock-Types, their second effect supports the “Tramid” themselves, and their 3rd effect activates in the Graveyard, supporting the deployment of “Tramids”, so in other words these are cards that directly play a key role for the “Tramid”! And their combos with “Tramid” monsters that let them manipulate Field Spell Cards during the opponent’s turns!

Tramid Fortress
[Field Spell Card]
All Rock-Type monsters on the field gain 500 DEF. “Tramid” monsters on the field cannot be destroyed by card effects. If this face-up card is sent from the Field Zone to the Graveyard: You can target 1 “Tramid” monster in your Graveyard; add it to your hand. You can only use this effect of “Tramid Fortress” once per turn.
[⇒ Its 1st and 2nd effects both support Defense, but the 2nd is especially strong!
Play your cards without fearing “Torrential Tribute” and “Dark Hole”! Also,its effect that activates in the Graveyard is particularly strong! Add the “Tramid” monster in your Graveyard to your hand that you need based on the situation!]

Tramid Cruiser
[Field Spell Card]
Each time a Rock-Type monster is Normal Summoned, gain 500 LP. If a “Tramid” monster is Normal Summoned: You can draw 1 card, then discard 1 card. If this face-up card is sent from the Field Zone to the Graveyard: You can add 1 “Tramid” monster from your Deck to your hand. You can only use this effect of “Tramid Cruiser” once per turn.
[⇒ Its 2nd and 3rd effecs both support “Preparations”, allowing you to make big moves in the early part of the Duel! Assemble your hand and get ready for your combos!]

Tramid King Golem
[Field Spell Card]
All Rock-Type monsters on the field gain 500 ATK. If a “Tramid” monster you control battles, your opponent cannot activate cards or effects until the end of the Damage Step. If this face-up card is sent from the Field Zone to the Graveyard: You can Special Summon 1 “Tramid” monster from your hand. You can only use this effect of “Tramid King Golem” once per turn.
[⇒ Its 1st, 2nd and 3rd effects that support “Attack” are all incredibly strong! Its second effect lets you battle without being disrupted, and its effect even lets you suppress the effects of monsters that have an effect that activates in the Graveyard! Its 3rd effect can even let you Special Summon “Tramid Sphinx” that activates in the Graveyard!]

The “Tramid” Trap Card Lets You Activate The Effect Of Your Choice!

A Trap Card also appears with effects that support the deployment of “Tramids”, and you can activate the effect you want! You can banish any Rock-Type/Field Spell Cards, not just “Tramid” cards, to use it!

Tramid Pulse
[Continuous Trap Card]
Once per turn: You can banish 2 Rock-Type monsters and/or Field Spell Cards from your Graveyard, then activate 1 of these effects.
● Target 1 other face-up card on the field; destroy it.
● Target 1 Rock-Type monster in your Graveyard; Special Summon it in Defense Position.
● Target up to 3 Field Spell Cards in your Graveyard; shuffle them into the Deck, then draw 1 card.
[⇒ Because it’s a “Tramid” card, it can even Special Summon “Tramid Sphinx”! Choose the effect you need depending on the situation!]

Cards That Work Well With “Tramid” Decks!
Let’s pick up various good cards based how they can work in tandem with your Deck! There are plenty of great cards that work with them, so look for them as well!

Strengthen Them With Rock-Type Monsters!

“Block Golem”
⇒ By Tributing this card, you can Special Summon 2 Level 4 or lower “Tramid” monsters from the Graveyard!
The two brought out can’t activate their effects that activate on the field that turn, but you can activate them during your opponent’s following turn, meaning it works really well with the “Tramid”! We suggest focusing your Deck around EARTH Attribue monsters if you use this card!

Effects That Work In Conjunction With Field Spells Are Strong!

“Terraforming”
⇒ Since this card can add Field Spell Cards from the Deck to the hand, this is a card that you’ll want to add no matter what!

“Chicken Game”
⇒ Its “Draw 1 Card” effect is perfect for setting up combos!
During your turn, activate another Field Spell, so your opponent cannot use the Draw effect during their turn! Depending on the situation, its effect that prevents damage is helpful when you’re in a pinch!

“Mound of the Bound Creator”
⇒ Since “Tramid Sphinx” is Level 10, it beomes untargetable by effects and cannot be destroyed by them either!
Seize victory by having Sphinx gain 500 ATK for each different Field Spell in the Graveyard!

“Psuedo Space”
⇒ By banishing a Field Spell Card from the card, this card gains its name and also its effects!
Banish a Field Spell that you have multiple copies of from your Graveyard, to avoid messing up the balance of “Tramid Sphinx” and its ATK gain!

What cards will you mix together for your Deck?
Think about cards that work well together.
… …. Consider conditions and search the Database to discover new possibilities!!

The Dark Illusion [On Sale April 9th, 2016]
Many new powerful cards from the animated series “ARC-V” appear, starting with the battle between Yuya and Jack! Also, many new cards related to “Dark Magician” are included! You’ll be able to pull off various splendid and phantasmagoric combos with both Spells and Traps! Also, keep your eyes on the new “Metalphosis” Series! They Pendulum Summon their Fusion Materials to the field, then aim to Fusion Summon again and again, making them quite the incredibly strong series!
[ To The Product Page ]