“Collectors Pack: Duelist of Destiny (CPD1)“, which comes out May 16th, 2015, makes Toon even stronger! It’s not just “Comic Hand” which was recently revealed, “Mimicat”, a Spell Card that Pegasus used in the “Yu-Gi-Oh! GX” anime is also becoming an Official Card Game card! This pack is filled with a ton of cards to make even “Toon” Decks even stronger! 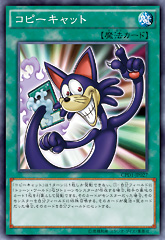 “Mimicat” lets you snatch a card from your opponent’s Graveyard and use it on your field (as if copying it)!! If your opponent uses a powerful card, you’ll be able to use it against them when you get a chance to make a counter-attack!

In addition, there’s other cards that make “Toon” Decks even stronger! Imagine what you might do next while using your “Toon” Deck, as you keep reading your opponent’s moves!

Collectors Packs: Duelist of Destiny [On Sale May 16th, 2015]
The “Duelist of Destiny” version of the Collectors Pack has appeared! It includes the legendary monster, “Timaeus the Knight of Destiny” who struck down a Wicked God in the “Yu-Gi-Oh! Duel Monsters” animated series! It can call forth the three “Legendary Knights”! And ofcourse, more cards with “Legendary Dragon” in the names appear! Also, classic “Red-Eyes” and “Toon” cards from “Duel Monsters” are being made into real Official Card Game cards! It’s enjoyable since it includes a ton of cards that have appeared in the animated series!
[ To the Product Page ]