“STRUCTURE DECK R -Great Divine Dragon Revival-“, which goes on sale February 6th, 2016, is a Deck that fights by bringing out giant Dragons one after another! It’s based on the same concept as the once popular Structure Deck (SD) “Revival of the Great Dragon”, but now it’s been updated with new cards!

Here, we’ll show you how to use the Deck and the new cards included in it! 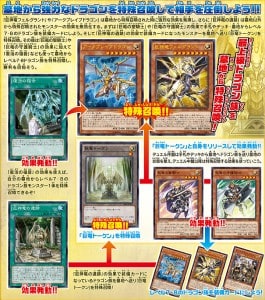 Tribute A Monster and a “Great Dragon Token” to Actuvate The Effect
Early on in the Duel, send Dragon-Type monsters from your hand or Deck to the Graveyard, then during the mid-game and later, use effects to Special Summon.

Arkbrave Dragon
[ATK 2400/DEF 2000]
(1) If this card is Special Summoned from the Graveyard: You can banish as many face-up Spell/Trap Cards your opponent controls as possible, and if you do, this card gains 200 ATK and DEF for each card banished this way.
(2) Once per turn, during the Standby Phase of the next turn after this card was sent to the Graveyard: You can target 1 Level 7 or 8 Dragon-Type monster in your Graveyard, except “Arkbrave Dragon”; Special Summon it.
[⇒ Its (1) effect is strong! You can even banish your opponent’s cards in their Pendulum Zones! Also, its (2) effect is also pretty powerful! You can make a strong combo by Special Summon “Great Divine Dragon Felgrand” from the Graveyard (mentioned below)!]

Great Divine Dragon Felgrand
[ATK 2800/DEF 2800]
(1) If this card is Special Summoned from the Graveyard: You can target 1 monster your opponent controls or in their Graveyard; banish it, and if you do, this card gains ATK and DEF equal to the banished monster’s Level/Rank x 100.
(2) If this card destroys an opponent’s monster by battle: You can target 1 Level 7 or 8 Dragon-Type monster in either player’s Graveyard, except “Felgrand, the Great Divine Dragon”; Special Summon it to your side of the field.
[⇒ It banishes monsters from your opponent’s field or Graveyard to power up! Its (2) effect can resurrect allies, which is also pretty intense!]

Introducing Warriors Who Handle Giant Dragons!
We’re introducing the monsters who effects quickly set up this Deck’s combos, by equipping not only from the hand, but the Deck or Graveyard as wel1! You can send Level 7 or 8 Dragon-Type monsters to the Graveyard quickly, allowing you to set up for huge moves that let you revive (Special Summon) one card after another!

Introducing New Spell Cards That Support Level 7 & 8 Dragon-Type Monsters!
The combos that “Ruins of the Great Divine Dragon” has with “Paladin of Felgrand” and “Guardian of Felgrand”!(Check out our illustrated guide). The effects work with one another, allowing you to bring out powerful Dragons! Also, “Gospel of Revival” possesses both offensive and defensive effects, meaning it powerful supports moves using Dragon-Types!

Ruins of the Great Divine Dragon
[Continuous Spell Card]
(1) While you control a Level 7 or 8 Dragon-Type monster, if a monster(s) is Special Summoned, except from the Graveyard: Negate its effects until the end of this turn (even if this card leaves the field).
(2) Once per turn: You can send 1 other face-up card you control to the Graveyard; Special Summon 1 “Great Dragon Token” (Dragon-Type/LIGHT/Level 1/ATK 0/DEF 0).
(3) If this card is in your Graveyard: You can send 1 Level 7 or 8 Dragon-Type monster from your hand or your side of the field to the Graveyard; add this card to your hand.
[⇒ Its (1) effect we showed supports the development of your strategy! Control the field to prevent your opponent from launching a counterattack!]

Gospel of Revival
[Normal Spell Card]
(1) Target 1 Level 7 or 8 Dragon-Type monster in your Graveyard; Special Summon it.
(2) If a Dragon-Type monster(s) you control would be destroyed by battle or card effect while this card is in your Graveyard, you can banish this card instead.
[⇒ It has a powerful effect to Special Summon “Arkbrave Dragon” and “Great Divine Dragon Felgrand” from the Graveyard! And, its (2) effect can protect Dragon-Types from the activation of cards like “Torrential Tribute” or “Bottomless Trap Hole”, meaning it’s a card that can play a key role both offensively and defensively!]

It’s Also Worth Noting The Reprinted Cards Included!
This Deck also contains a ton of powerful cards that can easily help your Deck. This includes powerful support for Dragon-Type Decks, such as “Red-Eyes Darkness Metal Dragon“, “Eclipse Wyvern” or “Dragon Ravine“, and cards that help multiple decks like “Raiden, Hand of the Lightsworn” and “Breakthrough Skill“, so overall plenty of powerful cards are included!

What kind of cards will you include in your Deck?

STRUCTURE DECK R －Great Divine Dragon Revival－
[On Sale February 6th, 2016]
The Second preconstructed Deck “Structure Deck R” appears, which takes the concept of a previously beloved Structure Deck, and updates it with new cards! This time, you get to wield the wondrous power of the Structure “Revival of the Great Dragon” which brings out powerful giant Dragons one after another! Of course new cards appear that strengthen your battle strategy, but this Deck that’s been reborn as “Great Divine Dragon Revival” includes plenty of support cards that work well with the new cards!
[To The Product Page]