Off a Questing we go to find some treasure!

Duel Quest returns once again the same as ever before. Duel to go down floors in a pyramid to obtain prizes such as Duel Tickets, Tokens to get Skills, Rarity Gems, Gems, Gold and Cards. The Main Featured card this time around is the Time Machine Trap card that Bandit Keith used against Joey during Duelist Kingdom. Time Machine can be obtained on the 800th floor.

You can also get more rewards by dueling both versions of Téa Gardner(Original series and DSOD). When you defeat the required amount, and in this case it being 5 for both of them you can obtain even more rewards. There is also a reward for dueling Bronk Stone once. Bronk Stone is a newly added character to Duel Links who is unlockable when ZEXAL world is at world level 6. 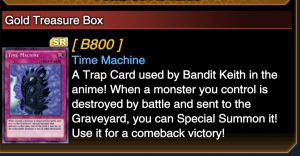