While Of Course “Naturia” Gets Stronger, All Sorts Of EARTH Insect-Type And Plant-Type Get Even Stronger!

“Next Challengers“, which goes on sale July 19th, includes a card that makes EARTH Insect-Type and EARTH Plant-Type monsters even stronger! 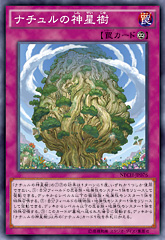 What Kind Of Decks Can You Use This In?
While it works out with “Naturia”, its useful in other EARTH Insect/Plant-Type centric Decks like “Traptrix”!

Let’s Introduce Some Points And Combos With “Naturia”

・ Its Third effect doesn’t count just the field, it also activates if you send it to the Graveyard. While you can add monsters like the Rock-Type “Naturia Cliff” or the high Level “Naturia Bambooshoot“, it can also add support cards, like “Naturia Forest“, to your hand as well.

Introducing Its Combos with “Traptrix”

For example, if you activate this card, you can pull of the following moves with say, “Traptrix Dionaea“!

・ Using the effect of “Traptrix Dionaea” to Special Summon “Traptrix Myrmeleo“, you can destroy 1 of your opponent’s Spells or Traps!
・ By Tributing “Traptrix Dionaea” with the effect of “Naturia Sacred Tree”, you can Special Summon “Traptrix Myrmeleo” from your Deck and destroy an opponent’s Spell or Trap Card!
・ Then, have both of your Myrmeleos attack, or you can use them for a Rank 4 Xyz Summon and take a swing at your opponent!

Alternatively, think of your own unique moves just for you!

(Note from the Org: Yes we’re aware Dionaea Special Summons in Defense. The original article does suggest you attack with both Myrmeleos, though.)