It appears a German version of the Sneak Preview card has popped up, and it reveals Vendread is a Ritual Theme!

The following text isn’t confirmed to be the exact English wording but should cover what it is. 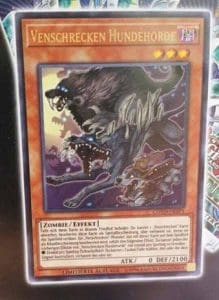 COTD-ENSP1 Vendread Houndhorde
Level 3 DARK Zombie Effect Monster
ATK 0
DEF 2100
If this card is in your GY: You can discard 1 “Vendread” card; Special Summon this card, but banish it when it leaves the field. A “Vendread” monster Ritual Summoned using this card on the field gains the following effect. You can only use each of the preceding effects of “Vendread Houndhorde” once per turn.
● Once per turn (Quick Effect): You can target 1 Spell/Trap your opponent controls; banish it.