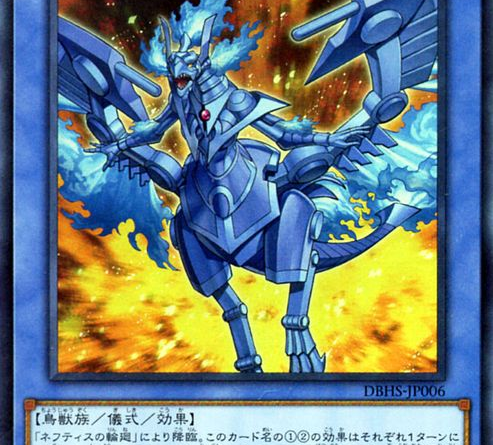 From Viz’s card articles and a video about Danger!

HISU-EN006 Cerulean Sacred Phoenix of Nephthys
Level 8 FIRE Winged Beast Ritual Effect Monster
ATK 3000
DEF 1000
You can Ritual Summon this card with “Rebirth of Nephthys”. You can only use each of the following effects of “Cerulean Sacred Phoenix of Nephthys” once per turn.
• During your Main Phase: You can destroy “Nephthys” cards in your hand and/or face-up field, then destroy an equal number of monsters your opponent controls.
• During your next Standby Phase after this card was destroyed by battle or card effect and sent to the GY: You can Special Summon this card from the GY.

HISU-EN009 Rebirth of Nephthys
Ritual Spell Card
This card can be used to Ritual Summon any “Nephthys” Ritual Monster. You must also Tribute monsters from your hand or field whose total Levels equal or exceed the Level of the Ritual Monster you Ritual Summon. Then, if you Tributed “Devotee of Nephthys” or “Cerulean Sacred Phoenix of Nephthys”, you can destroy 1 card on the field.

Also referenced is the Ritual Monster “Devotee of Nephthys”. 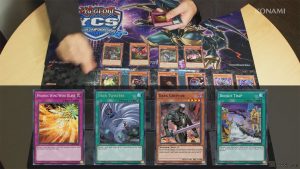