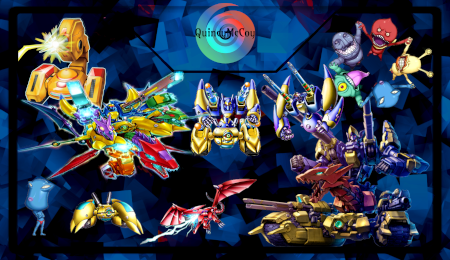 Chazz it up with Machines, Speedos, and Armed Dragons!

This Chazz-inspired deck enhances the mechanized LIGHT Union machines of both ABC-Dragon Buster and XYZ-Dragon Cannon, bringing everything together with the help of some Ojama beasts. The ABC engine is the height of Union power, featuring Union Hangar and a flurry of material for Link Summons as needed, especially when you throw Union Driver into the mix for more plays. But where this variant deviates from a standard ABC deck is the Ojamas, a LIGHT Beast archetype that have 0 ATK and 1000 DEF. Ojama Blue is the crux of your strategy here, as whenever it is destroyed in battle, you can search 2 Ojama cards from your deck. Pick Ojamatch for another Ojama search and a Normal Summon, such as for another Blue for more searches, Ojamagic for an array of Ojamas to hand, or Ojamassimilation to link the two halves of your strategy together.

That’s right, Assimilation is quite the power card for this hybrid. By banishing 3 Ojamas from your GY, you get all of the required pieces for either ABC or XYZ. Get two Ojamassimilation to hand, and you can make both of the Fusions to then contact fusion into A-to-Z-Dragon Buster Cannon, a behemoth of a boss monster ready to negate anything your opponent throws at you. And if he isn’t enough to win the duel, just tag him out for the two fusions once more! Supporting this strategy even further is the new Ojama Pink for additional draw power in a pinch, and the handy XYZ Combine (YGOrg Translation) which lets you get to your X-Head Cannon, Y-Dragon Head, or Z-Metal Tank for access to XYZ without needing a second copy of Assimilation. Strip it down to the Chazz basics, with the Ojama and the ABC/XYZ Union Machines.

Note: This is continuing the style of Creative Deck Profile articles, designed to showcase a build through replays and an attached summary. If you wish to see a CDP for an archetype, theme, or strategy you love, feel free to private message me on the YGOrg Discord server, the comments section of any of my YouTube videos, or just post a comment in response to this article on our Facebook page with your ideas to keep under consideration! On most YGO-related communities my username is Quincymccoy, so feel free to reach out. Current pending requested profiles include: TeleDAD, Yang Zing, BLS, Icejade. Some of my prior requests was covered by participants in CDSS6 and even more were re-covered in CDSS7, so I highly suggest checking those out and subscribing to my channel for all of my latest profiles on YouTube!