A Psychic Has Appeared Armed With An Effect That Return A Card In The Opponent’s Graveyard To The Deck!

“Extra Pack -KNIGHTS OF ORDER- (EP14)” includes a Psychic-Type that can return a card in the opponent’s Graveyard back to the Deck!

How will you use it? 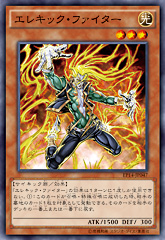 Wattchic Fighter
(Psychic-Type ATK 1500/DEF 300)
When this card is Normal or Special Summoned: You can target 1 card in your opponent’s Graveyard; put that target on the top or bottom of the Deck. You can only use the effect of “Wattchic Fighter” once per turn.

What kind of ways to use it do you imagine?
You can activate this card’s effect not only when it’s Normal Summoned, but also when it’s Special Summoned, so you can make the most of the effect of “Emergency Teleport” that can Special Summon a Level 3 or lower Psychic-Type from the hand or Deck!

And of course, “Serene Psychic Witch” or “Shining Angel” are pretty great too, but you can amazingly also Special Summon it from the Deck with the effect of “Wattdragonfly“!

We’ll let you consider the possible ways to use this card.

EXTRA PACK -KNIGHTS OF ORDER- [September 13th, 2014]
The 2014 Extra Pack that includes cards that were released in overseas Booster Packs has appeared!
It includes more “Noble Knights” and “Noble Arms”, continuing from where “EXTRA PACK – SWORD OF KNIGHTS -” left off, but it also contains of a ton of strong cards that support a variety of Decks!! And, this pack includes the Prize Cards from last year’s World Championship as EXSE (Extra Secret Rare) cards!!
[ To The Product Info Page ]