A Super Strong Support Card That Promises To Be Useful In Decks That Use Pendulum Monsters!
“The Secret of Evolution” (SECE), which comes out November 15th, 2014, includes a powerful Spell Card that lets you draw two cards, while expanding the ways you can use Pendulum Monsters! 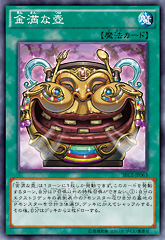 Pot of Wealth
(Normal Spell Card)
You can only activate 1 “Pot of Wealth” per turn. During the turn in which you activate this card, you cannot Special Summon monsters, except by Pendulum Summoning. Choose 3 Pendulum Monsters in your Graveyard or that are face-up in your Extra Deck, shuffle them in your Deck, then draw 2 cards.

Use Pendulum Monsters To Draw 2 Cards!

・ One that you discarded for the cost of a Monster Effect, such as sending your “DD Magical Astronomer Galilei” to the Graveyard

Consider new strategies and combos you can pull off with this card!