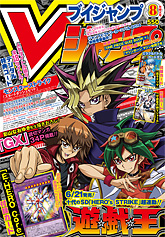 In the August Issue of V Jump (currently on sale, it went on sale June 21st), was a new card for the “HERO” Series, “Elemental HERO Core”!

Speaking of “HERO” cards, “Structure Deck -HERO’s STRIKE-” went on sale, but they were also used by Duelists who participated in this year’s World Championship Qualifier!!

Also, “HERO” Decks which featured cards other than the new “HEROES” in “Structure Deck -HERO’s STRIKE” were used by some of the Worlds reps from Japan!

Elemental HERO Core
(Warrior-Type ATK 2700/DEF 2200)
3 “Elemental HERO” monsters
Must be Fusion Summoned and cannot be Special Summoned by other ways. Once per turn, when this card is targeted for an attack: You can double this card’s ATK until the end of the Damage Step. At the end of the Battle Phase, if this card attacked or was attacked: You can target 1 monster on the field; destroy that target. When this card is destroyed (either by battle or by card effect): You can target 1 Level 8 or lower “Elemental HERO” Fusion Monster in your Graveyard; Special Summon that target, ignoring its Summoning conditions.

Add cards that help Fusion Summon it, like “Miracle Fusion”! Alsso check out the August Issue of V Jump for the One Shot story of the Duel between “Judai” and “Koyo”, which’ll make you want to try “HEROES” for yourself!