From Japan we get a proper confirmation of the text of one of the first cards from Dragons of Legend: 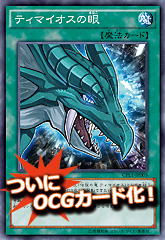 That “Eye of Timaeus” is finally an OCG Card at long last!
“Duelist of Legend” which comes out May 17th for the Official Card Game, contains “The Eye of Timaeus” from the original “Yu-Gi-Oh!” animated series, which has finally been made into an Offical Card Game Card!

This is the basic summary of the card’s effect

The Eye of Timaeus
“By sending a “Dark Magician” monster from your side of the field to the Graveyard, you can Fusion Summon a Fusion Monster from your Fusion Deck that lists that monster as a Fusion Material! And this card has a Rule that always treats it as “Legendary Dragon Timaeus”!”

This same pack includes “Dark Magician Girl the Dragon Knight” who has a powerful effect, and that this card can Special Summon! In addition, this Normal Spell Card is treated as “Legendary Dragon Timaeus”… why on Earth…

Which pretty much confirms the text from the blurry ad before:

The Eye of Timaeus
Normal Spell Card
(This card is also always treated as “Legendary Dragon Timaeus”.)
Target 1 “Dark Magician” monster you control; Fusion Summon 1 Fusion Monster from your Extra Deck that lists that monster on the field as a Fusion Material Monster, using it as the Fusion Material. You can only activate 1 “The Eye of Timaeus” per turn.