Let’s take a close look at an “Full Armored” monster, which can armed by Xyz Summoning it on top of an Xyz Monster! 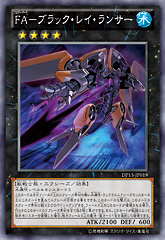 Full Armored Black Ray Lancer
(WATER Beast-Warrior-Type ATK 2100/DEF 600)
You can Xyz Summon this card by placing it on top of a Rank 3 Water Attribute Xyz Monster you control that has no Xyz Material! It gains 200 ATK for each Xyz Material attached to it. It can also use all its Xyz Material when it would be destroyed in order to feint that destruction! And, if this card destroys an opponent’s monster by battle, its final effect lets you destroy a Spell or Trap your opponent controls! 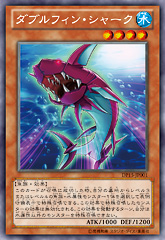 Double Fin Shark
(WATER Fish-Type ATK 1000/DEF 1200)
When this card is Normal Summoned, its powerful effect lets it Special Summon a Level 3 or 4 WATER Fish-Type monster from the Graveyard, but in face-up Defense Position! By Special Summoning a Level 4 monster, you can instantly summon a Rank 4 Xyz Monster with this one card! But during the turn you activate this card’s effect, you can only Special Summon WATER monsters, so focus on Xyz Summoning monsters like “Bahamut Shark” and the like! By using the effect of “Bahamut Shark”, you can Special Summon “Submersible Carrier Aero Shark”, instantly setting up for “Full Armored Black Ray Lancer”! 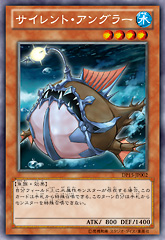 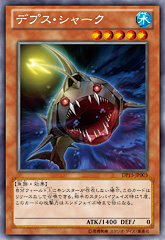 Depth Shark
(WATER Fish-Type ATK 1400/DEF 0)
Its a Level 5 monster that can be Normal Summoned without Tribute if you control no monsters. Once per turn, during your opponent’s Standby Phase, you can double this card’s ATK until the End Phase, giving it 2800 ATK during the opponent’s turn (If its ATK is increased by other cards, it’ll double based on that value and make it even bigger!), making it difficult for your opponent to attack! You can take advantage of the fact it’s a Level 5 Water Attribute Monster by using it for Ryouga and Rio’s Rank 5 Numbers that we’ll be introducing later!

Number 73: Abyss Splash
(WATER Warrior-Type ATK 2400/DEF 1400)
2 Level 5 WATER Monsters
It has a powerful effect that lets it detach an Xyz Material once per turn, this card can double its ATK until the opponent’s End Phase! Even though during the turn it’s activated, it can only deal half the damage, but it makes up for it with being able to be conveniently activated during the opponent’s turn!! By using “Saber Shark”, who we’ll introduce later, this guy can easily be Xyz Summoned!

Saber Shark
(WATER Fish-Type ATK 1600/DEF 1200)
It has an effect that can increase or decrease the Level of a Fish-Type monster on the field twice per turn! By Normal Summoning this monster and then Special Summoning “Silent Angler”, you can Xyz Summon a Rank 3, 4 or 5 monster! By using this effect that supports Xyz Summoning Rank 3~5 monsters, you can make full use of all of Ryouga’s Xyz Monsters! However, be warned, during the turn you activate this effect, you can only Special Summon WATER monsters!

Number 94: Crystal Zero
(WATER Warrior-Type ATK 2200 DEF 1600)
2 Level 5 WATER Monsters
By detaching an Xyz Material, you can halve the ATK of a face-up monster until your End Phase! It’s quite powerful since you can activate this effect during your opponent’s turn and it isn’t limited to being used once per turn! You can also target your own monsters, such as chaining to “Bottomless Trap Hole” to make your monster smaller than 1500 ATK, and thus avoid being destroyed and banished!

Guard Penguin
(WATER Winged Beast-Type ATK 0/DEF 1200)
When you take damage due to a card effect, you can activate this card’s effect, Special Summoning it from the hand, and then gain Life Points equal to the damage taken! You can use this powerful effect when you take damage by your own card effect, allowing you to Special Summon it from your hand! If you decide to combine it with Blackwing – Zephyros the Elite, who is also as a Winged Beast-Type and can inflict damage to you, you can assemble two Level 4 monsters on your field without summoning! You’ll be able to combine them for an Xyz Summon and attack!

Diamond Dust
(Normal Trap Card)
This Normal Trap Card destroys all WATER monsters on the field, and then inflict 500 damage to your opponent for each monster destroyed by this card’s effect and sent to the Graveyard. Use it with care since it affects your field along with your opponents. Of course, your opponent takes the damage, so since it also counts your Water Attribute Monsters being sent to the Graveyard, its effect is useful for when you’re aiming to land a game-ending blow.

Let’s Give a Small Introduction To Some Noteworthy Reprinted Cards

Bahamut Shark
Xyz Summon it with 2 Level 4 Water Attribute Monsters! It has a mighty effect that Special Summons a Rank 3 or lower Water Attribute Xyz Monster from your Extra Deck! Aim to set up a combo that’ll allow you to Xyz Summon a “Full Armored” Xyz!

Submersible Carrier Aero Shark
Xyz Summon it with 2 Level 3 Monsters! Its effect allows it to deal 100 damage for each of your banished monsters. Its also a monster you can Special Summon with Bahamut Shark’s effect!

Ice Beast Zerofyne
Xyz Summon it with 2 Level 4 Winged Beast-Type Monsters! It negates the effects of all of your opponent’s face-up cards, and then gains 300 ATK for each face-up card on the field, except itself!

Torrential Tribute
Its a Normal Trap that destroys every monster on the field when a Monster is Summoned! This powerful card that’s already used in a ton of Decks has been reprinted, so it’ll be easy to get your hands on!

Which of Ryouga and Rio’s cards will you use to make a Deck?