A Spell Card has appeared that has another ability you can activate from the Graveyard! You can use its effect twice to destroy Spell and Trap Cards!

In “Crossover Souls (CROS-JP)” (which goes on sale February 14th, 2015), there’s a Spell Card that has an effect you can also activate from the Graveyard! Along with destroying Set Spell/Trap Cards, after being sent to the Graveyard, you can use its effect to destroy a face-up Spell or Trap Card on the field! It’s a powerful card you can use twice, so try and check it out! 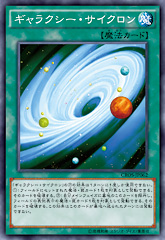 What kind of Deck will you put this in?

Not only does it support you by destroying cards that could ambush you, thus allowing you to attack safely, but it’s also useful for dealing with Continuous Trap Cards and the like that stand in your way with its effect you can activate from the Graveyard!
(※ Please keep in mind that its effect you activate from the Graveyard cannot be used during the same turn it’s been sent there!)

Consider the possibilities of how to use this card and give it a try.

Crossover Souls [On Sale in Japan February 14th, 2015]
The “Clear Wing Synchro Dragon” of Yugo who rides a D-Wheel to Synchro Summon appears! A ton of cards used by Yuya and his many rivals are also included, and there’s also a ton of cards included to power up existing Series! Also keep your eyes on the new Series “Zefra” who also carry the names of the existing Series ‘tellarknight, Yang Zing, Shaddoll, Nekroz, and Ritual Beast!
[To The Product Information Page]