The Jump September 2014 Issue of V Jump (currently on sale since July 19th), comes with the Xyz Monster “DDD Caesar the Wave Lord” used by the master of all forms of Summoning, Akaba Reiji! 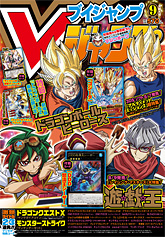 The “DD” Series has a ton of support cards in “Booster SP Raging Masters“, which comes out August 9th, 2014, making the Deck closer and closer to being playable!
And, on August 4th, 2014, the 36th Issue of Weekly Shonen Jump comes with the Pendulum Monster “DD Cerberus”. As well, on August 21st, 2014, “The Valuable Book 17” (VB17) comes with two cards. One of which is a powerful Pendulum Monster that isn’t from the anime and is exclusive to the real life Official Card Game, “DDD Leonidas the Rebellious Lord”!! With every new card that appears, the “DD” series gets even stronger!

Get your hands on “DDD Caesar the Wave Lord”, and then try and play the “DD” series with its multiple forms of Summoning! First off, let’s check its strengths!

DDD Caesar the Wave Lord
DDD Caesar the Wave Lord
(Fiend-Type ATK 2400/DEF 1200)
You Summon him with 2 Level 4 Fiend-Type Monsters! It possesses a startling effect that lets you Special Summon from your Graveyard, at the end of the Battle Phase, as many monsters as possible that were destroyed this turn! Also this effect can be activated during your opponent’s turn!! (But keep in mind that if you use it, during the next Standby Phase, you’ll take 1000 damage times the number of monsters Special Summoned!) Also, if this card is sent from the field to the Graveyard, you can use its powerful ability to add 1 “Covenant” card from your Deck to your hand, which lets you set up for your next move!

Xyz Summon “DDD Caesar the Wave Lord” easily and quickly with “DD Cerberus” which comes with Weekly Jump Issue 36! Since it can be made with Level 4 Fiend-Type monsters, use Cerberus’ Pendulum Effect to make any DD monster on your side of the field into a Level 4 monster!

The Combo with “DDD Leonidas the Rebellious Lord” is incredibly strong! Use it to get the most out of “DDD Caesar the Wave Lord”!

“DDD Leonidas the Rebellious Lord” (from VB17) can be Special Summoned from your hand when you take effect damage, and then you gain Life Points equal to that damage. So if you have it when Caesar revives any number of monsters, you can basically avoid caring about how much damage you take!
(However, you do remember if your Life Points hit 0 before you recover them, you lose, right!?)
Also when you take effect damage, you can activate its potent Pendulum Ability! Leonidas destroys himself, then until the end of the turn, all damage you take becomes Life Point recovery instead!
Use Caesar’s mass revival effect as you want and follow up with regaining a ton of Life Points!
=You should also learn to master all the different kinds of Summoning with “DD”=
“Get a good taste of the demons who rule over the Different Dimension as if they were kings!”