Atem, Superior of the In-Between, reporting in.

The second quality check is one where important little details are handled – and in it, one card dominated the work, requiring over thirty minutes of research, careful word work, and lost sleep. 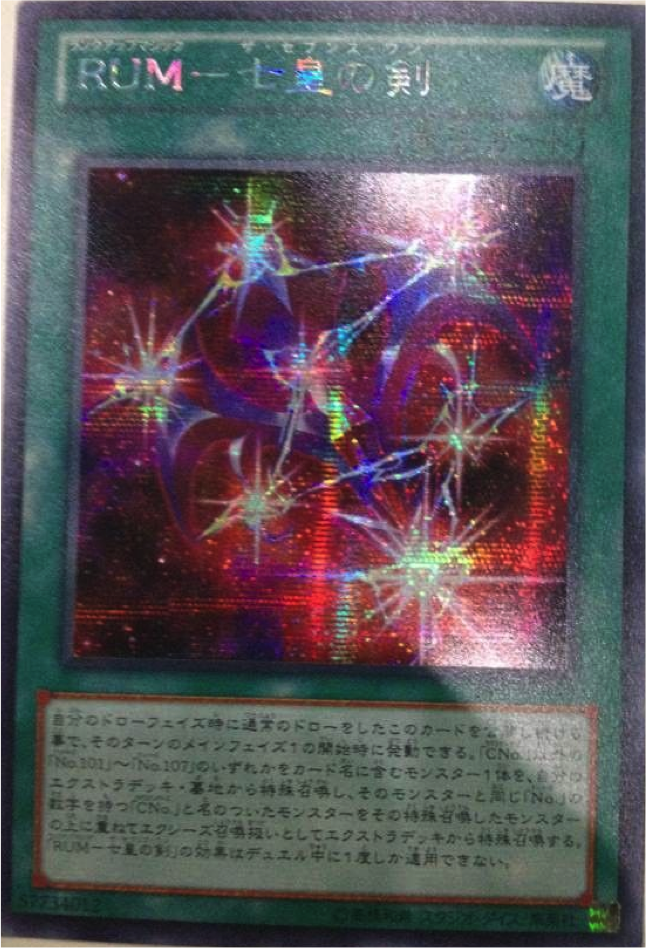 As work on the card kept getting more difficult, the Organization and its serving Nobodies agreed that this would be an excellent example for a lesson about the work we do.
Why do we wait for Konami rulings?
Why do we doublecheck things over and over?
How much work goes into our hobby?
The Seventh One explains all.
As we collect HQ photos and prepare them for the wiki and for other uses, read on beyond the break and learn more about the hard work the Organization must do.

Our work always has to start with scouring the internet for images of the oncoming cards: there are too many websites to for me to list, but leaks can pop up most anywhere.

Once we have an image, we grab its name, localize the name, and hand the name and image over to the high-ranking Organization members who help administrate the Yu-Gi-Oh! Wiki. From there, wiki users and admins alike get the articles up.

How does “ＲＵＭ－七皇の剣” become “Rank-Up-Magic The Seventh One”? There’s no English words in there, right? Wrong – above the “RUM” part of the name, there are tiny Japanese graphemes called “furigana” telling us how the “RUM” should be pronounced, and those characters read as “Rank-Up-Magic”. Above the Japanese characters in part of the name after “RUM”, there are “furigana” characters telling us to say “The Seventh One”.

After all that, then we get to work on extracting a card’s raw text.

Here is the raw text of The Seventh One.
自分のドローフェイズ時に通常のドローをしたこのカードを公開し続ける事で、そのターンのメインフェイズ１の開始時に発動できる。「ＣＮｏ．」以外の「Ｎｏ．１０１」～「Ｎｏ．１０７」のいずれかをカード名に含むモンスター１体を、自分のエクストラデッキ・墓地から特殊召喚し、そのモンスターと同じ「Ｎｏ．」の数字を持つ「ＣＮｏ．」と名のついたモンスターをその特殊召喚したモンスターの上に重ねてエクシーズ召喚扱いとしてエクストラデッキから特殊召喚する。「ＲＵＭ－七皇の剣」の効果はデュエル中に１度しか使用できない。

Now, we can’t just throw that into google translate, otherwise we get the following.
By continuing to publish this card with a draw normal Draw Phase of his, you can activate at the start of Main Phase 1 of the turn. The Special Summoned from the Extra Deck or Graveyard, 1 monster that includes the card name or “CNo.” Than “No.101” to “No.107”, the same as the monster of “No.” special Summon from the Extra Deck Xyz summon as to treat it on top of the monster special Summoned a monster with a name to have a number as “CNo.”. Effect of the “sword of the RUM-Nanasumeragi” can only be used once in the duel.

Instead, if we actually understand the language, we get something like the following.
By continuously revealing this card that was drawn with a normal draw during your Draw Phase, you can activate this card at the start of that turn’s Main Phase 1. Special Summon from your Extra Deck/Graveyard 1 non-“Number C” monster that includes anything “from Number 101 to Number 107” in its card name, and Special Summon from your Extra Deck as an Xyz Summon 1 “Number C” monster that has the same “Number” numeral in its name as that Special Summoned monster, by using it as the Xyz Material. You can only use the effect of “Rank-Up-Magic – The Seventh One” once per Duel.

Now, that’s a little better, but it doesn’t use “Yu-Gi-Oh! language”, and it doesn’t fit the TCG’s Problem-Solving Card Text paradigm. Let’s refine it some.

There are some problems:
you have to reveal it, almost like that’s an activation cost, but it’s not possible to have an activation cost for something be paid ages before you activate the thing that cost is tied to.
Its last line – the once-per-duel line – means it might have only one effect, but the thing that allows you to reveal the card when drawn and keep revealing it can’t be the same thing as the “when you activate me, do all this summoning stuff” effect. So, either it has two effects, or it has one effect and some text stipulations which are RULES instead of effects – this is
It talks about “Number” numerals – it’s the first card to do that, so how do we make sure players clearly understand how it works in all cases?

It took a long time, but here’s what we decided upon.
This card breaks a lot of new ground. We decided first and foremost that we will not consider this card finalized until Konami’s rulings for PRIO-JP hit soon. Until then, this card in particular remains up in the air: it is doing some radical things and breaking some established rules of how-things-work in doing so, so the best we can do for this one is estimate how it works out until Konami steps in and speaks about it. It shouldn’t be long after the sale date.
We decided that, as it stands, the way to reveal this card looks like an effect, but probably isn’t one, like how Swords of Revealing Light staying on the field for a set amount of time isn’t an effect either. We decided, for now, to write it as if it were an effect, just in case.
We considered, but decided against, introducing a proper term – we’re going to try writing it as follows, but if it’s still unclear, we’ll introduce the term Number – or the term numeral – to describe what number a “Number” monster holds.

Here’s our current revised translation:
PRIO-JP058
Rank-Up-Magic The Seventh One
Normal Spell Card
If you draw this card for your normal draw in your Draw Phase, you can play with it revealed at all times.
At the start of your Main Phase 1, if this card was drawn that way this turn, and has been revealed that way ever since: Special Summon, from your Graveyard or Extra Deck, 1 “Number” monster that includes a number between 101 and 107 in its name, except a “Number C” monster. Then, Special Summon from your Extra Deck 1 “Number C” monster with the same number in its name as that Special Summoned monster, by using it as the Xyz Material. (This Special Summon is treated as an Xyz Summon.)
You can only use each effect of “Rank-Up-Magic The Seventh One” once per Duel.

It is NOT a finished translation, and we will be updating it when Konami issues its rulings for the set.

We are in a unique position: one where there is no way for anyone outside Konami to be absolutely certain how The Seventh One works in the OCG: the card’s own text presents several problems that can’t be solved without inside information. So, the Organization eagerly awaits Konami’s rulings.

I know people might want to think we should “just take a guess”, but we disagree. This card presents unique difficulties, difficulties which require a specific amount of discipline and patience. Waiting for Konami isn’t just the wise play, it’s the moral play, it’s the right play.

An example of why it is good to “wait for Konami’s actions” comes from Q3 2011, when the world was waiting for Lightpulsar Dragon to be released in Japan. For a time, the only knowledge of Pulsar came from its first magazine scan, one that used the word 場合 (if), instead of using the word 時 (when). You’ll note that the IRL copies of the card all use “when”.

Websites like Dueling Network did not “wait for Konami”, so they had to deal with an excessively lethal FTK deck, all because they didn’t wait for the card to get released. They assumed card text can’t change between a preview picture and a final print, and they paid the price for a little while.

Now, Dueling Network waits for Konami, and has learned its lesson.

Other websites are eager to post information without any care for the consequences: but the Organization knows the score, and knows when to be patient. This is a case where we must… eagerly watch Konami.