Regarding the new cards that support the “T.G.” Synchro Strategy

The First “T.G.” Link Monster of The Series Debuts!

A Link Monster makes its debut!! Not only does it have a powerful effect that supports Synchro Summoning, but it also has an effect that protects Synchro Monsters from being targeted by effects!

Its Effect That Calls 3 Monsters From The Hand, Deck Or GY Is Intense! Continuously Synchro Summon To Head To A New Horizon!! 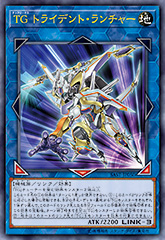 T.G. Trident Launcher
[ATK 2200]
2+ Effect Monsters, including a “T.G.” Tuner
If this card is Link Summoned: You can Special Summon 1 “T.G.” monster each from your hand, Deck, and GY to your zones this card points to in Defense Position, also you cannot Special Summon monsters for the rest of this turn, except “T.G.” monsters. You can only use this effect of “T.G. Trident Launcher” once per turn. Your opponent cannot target “T.G.” Synchro Monsters this card points to with card effects.

It Has 3 Powerful Effects To Support Plays! Add Allies From The GY To The Hand, Deploy An Ally From The Hand, And Synchro Summon During Your Opponent’s Turn!! 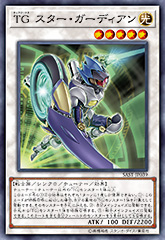 T.G. Star Guardian
[Tuner ATK 100/DEF 2200]
1 Tuner + 1+ non-Tuner “T.G.” monsters
Once per Chain, during your opponent’s Main Phase, you can (Quick Effect): Immediately after this effect resolves, Synchro Summon using this card you control. You can only use each of the following effects of “T.G. Star Guardian” once per turn.
● If this card is Special Summoned: You can target 1 “T.G.” monster in your GY; add it to your hand.
● During your Main Phase: You can Special Summon 1 “T.G.” monster from your hand.

“T.G.” Monsters That Support Your Plays!!

A Level 4 Tuner Appears! It’s Multi-Faceted With An Effect To Call From The GY As Well As An Effect To Modify The Levels Of Allies!

If There’s An Ally, It Can Special Summon Itself From The Hand! If This Card On The Field Is Destroyed, It Can Add An Ally From The Deck To The Hand!

A Level 1 Tuner! It Can Treat Itself As A Non-Tuner Monster, And Even Call Forth A “Token”!

Let’s Go To The Experience Event!

You can choose to experience either the “T.G. (Tech Genus)” or “Shiranui” Decks! Participation is free, and before Dueling those participating will get a lecture on how to play the Deck from the staff!

▼ An Experience Event where you can Duel with Decks containing the latest cards before they’re released! 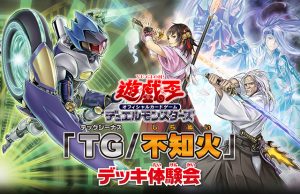 Savage Strike
[On Sale October 13th, 2018]
It of course includes cards that appeared in the “Yu-Gi-Oh! VRAINS” animated series, but 3rd core booster for the 2018 fiscal year contains vital cards for all Duelists! Playmaker, who uses the Cyberse, obtains a new Synchro Monster! As well, cards that support Synchro Summoning are included! Also, enjoy the brand new Card Series and new cards for previously popular Card Series!
[ To The Product Page ]