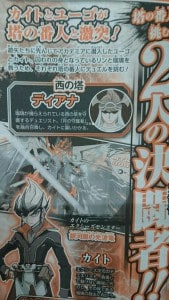 Yugo and Kaito have snuck into Academia ahead of the rest of the gang. In order to save the kidnapped Rin and Ruri, both of them have to fight the guardian of each girl’s tower.

The Western Tower
Diana
The Duelist guarding the western tower where Ruri is held. She Fusion Summons “Moon Protector” and attacks Kaito.

Kaito
A Duelist from the Xyz Dimension. He’s taken over for the severely injuried Kurosaki, making it his mission to save Kurosaki’s younger sister, Ruri. 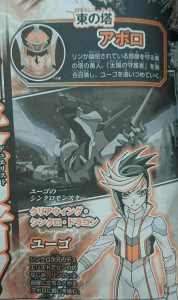 The Eastern Tower
Apollo
The guardian of the eastern tower where Rin is being held. By Fusion Summoning “Sun Protector”, he attacks Yugo.

Yugo
A Duelist from the Synchro Dimension who is Rin’s life-long friend. He fights Apollo on the way to the room where Rin is being held.