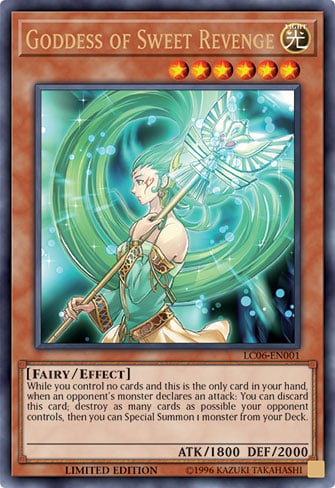 One of the new cards from Legendary Collection: Kaiba has been revealed.

LC06-EN001 Goddess of Sweet Revenge
Level 6 LIGHT Fairy Effect Monster
ATK 1800
DEF 2000
While you control no cards and this is the only card in your hand, when an opponent’s monster declares an attack: You can discard this card; destroy as many cards as possible your opponent controls, then you can Special Summon 1 monster from your Deck.

Of note, this card is a remake of “Gyakutenno Megami”, a card best known for jamming the gun of Pegasus’ guards. Of what it’s worth, Gyakuten no Megami means “Goddess of Reversal/Turnaround”, which makes Goddess of Sweet Revenge a fitting remake, it literally turns the Duel around.