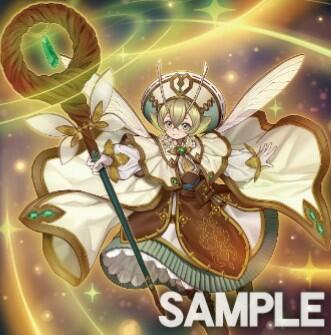 PHHY-JP025 円喚師フェアリ Enkanshi Faeri (Hexenringe Summoner Faeri)
Level 3 WIND Insect Tuner Effect Monster
ATK 800
DEF 1500
You can only Special Summon with the (1)st effect of this card’s name once per turn.
(1) If there is an Insect and/or Plant monster in the GY, you can Special Summon this card (from the hand).
(2) If this card you control is used as Synchro Material for an Insect or Plant monster, you can treat it as a non-Tuner.

Note: Enkan (円環) means a Torus, or basically a doughnut shaped object, typically, but the second Kanji (環) (circle), has been replaced by 喚 (Cry/Summon), the latter half of 召喚 (Shoukan), i.e. Summon. It’s obviously riffing on a Fairy Ring, so, let’s go with Hexenringe, a German term for them.

This monster also has the extended letter cut off, so I’ll go with the spelling of Faerie to differ between the two, alright?

PHHY-JP042 サークル・オブ・フェアリー Circle of Faerie
Level 7 WIND Plant Synchro Effect Monster
ATK 2200
DEF 2500
Materials: 1 Tuner + 1+ non-Tuner monsters
You can only use the (2)nd effect of this card’s name once per turn.
(1) During your Main Phase, you can Normal Summon 1 Insect or Plant monster in addition to your Normal Summon/Set. (You can only gain this effect once per turn.)
(2) When a monster(s) is destroyed by a battle involving your Insect or Plant monster and sent to the GY: You can target 1 of them; inflict damage to your opponent equal to half the ATK it had on the field, then you gain LP equal to the damage inflicted.