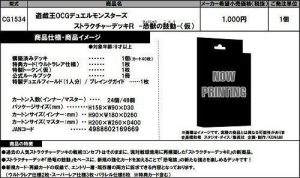 This picture of an order form reveals that the next Structure Deck R will be 恐獣の鼓動 (Kyoujuu no Kodou). This name is very similar to the Japanese name for the ninth Structure Deck “Dinosaur’s Rage” from 10 years ago.

This product has the same content as the previous Structure Deck R decks:
-40 cards
-1 additional card
-1 token
-1 rulebook
-1 playing guide
-1 dueling field
-A generic statement on how this is a revised strategy of the old deck, it has new cards and reprints, it’s ready to be played, and it works for both beginners and seasoned players, just like all the other Structure Deck R decks.

As for trivia and what the deck may be about, the old deck is named 恐竜の鼓動. The difference lies in the first word (恐竜 vs. 恐獣). In the first deck, 恐竜 is the name of the Dinosaur Type. In this new Structure Deck R, 恐獣 is a term used in the name of some “Tyranno” monsters, such as Super Conductor Tyranno, the cover of SD09. So an appropriate name may be “Tyranno’s Rage”. There are only 4 monsters in the OCG whose name contains “恐獣”:

Super-Ancient Dinobeast is not a “Tyranno” monster in the TCG, and conversely, Tyranno Infinity is not a “恐獣” monster in the OCG (ディノインフィニティ == Dino Infinity) and Galaxy Tyranno’s name doesn’t have the right Kanji, even if it’s read “Tyranno” too. The deck will probably focus on the bigger Tyrannos that don’t have name discrepancies, but having so few Dinosaur-Type monsters, we’ll most likely see some old favorites too. 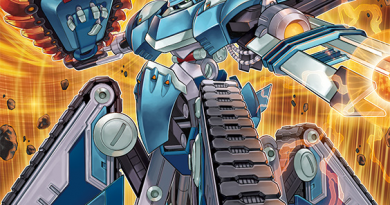