Arc-V has a new OP and ED announced starting with the new arc, presumably.

The new opening is by Bullet Train.

The new Ending is by Ono Kenshou and Hosoya Yoshimasa (Yuya and Reiji’s voice actors, respectively.) Maou Chouryuu Beelzeus / Beelzeus the Uber Diabolical Dragon
Level 10 DARK Dragon-Type Synchro Effect Monster
ATK 4000
DEF 4000
1 DARK Tuner + 2 or more non-Tuner monsters
(1) Cannot be destroyed by battle or card effects.
(2) Other monsters you control cannot attack.
(3) Once per turn: You can target 1 monster your opponent controls; make that monster’s ATK 0, and if you do, gain LP equal to that monster’s original ATK. Also, any battle damage this card inflicts to your opponent during this turn after activating this effect is halved. 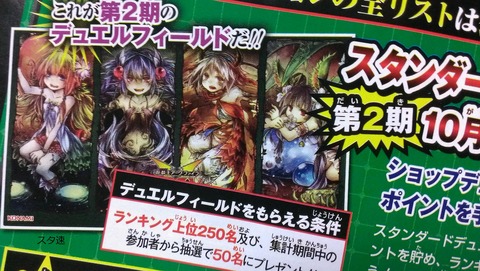 The new Standard Duel Ranking mat is a Traptrix mat for 300 people!