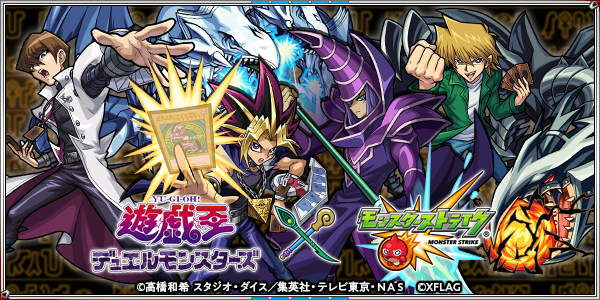 Yu-Gi-Oh! crosses over with a Japanese smartphone game

Yu-Gi-Oh! is currently gearing up to do a collaborative event with the Smartphone Game “Monster Strike”, where you basically slingshot your character into opponents, and collect monsters.

You’ll be able to go through a story event based on the original Duel Monsters TV series, based on Duelist Kingdom and Battle City, and obtain characters and monsters from the original Yu-Gi-Oh!

In turn, by clearing certain conditions, you’ll be able to get 2 commemorative Cards in real life at GEO and TSUTUYA stores by demonstrating proof you’ve cleared the events. These cards will be revealed at a later time.