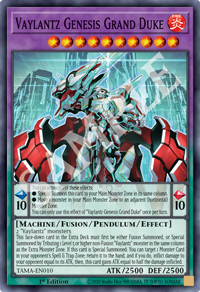 An ace monster, a Fusion monster (“Fusion”) and 4 cards for a certain Deck.

TAMA-EN010 Vaylantz Genesis Grand Duke
Level 10 FIRE Machine Fusion Pendulum Effect Monster
ATK 2500
DEF 2500
Pendulum Scale: 10
Pendulum Effect:
You can activate 1 of these effects;
• Special Summon this card to your Main Monster Zone in its same column.
• Move 1 monster in your Main Monster Zone to an adjacent (horizontal) Monster Zone.
You can only use this effect of “Vaylantz Genesis Grand Duke” once per turn.
Monster Effect:
Materials: 2 “Vaylantz” monsters
This face-down card in the Extra Deck must first be either Fusion Summoned, or Special Summoned by Tributing 1 Level 5 or higher non-Fusion “Vaylantz” monster in the same column as the Extra Monster Zone. If this card is Special Summoned: You can target 1 Monster Card in your opponent’s Spell & Trap Zone; return it to the hand, and if you do, inflict damage to your opponent equal to its ATK, then, this card gains ATK equal to half the damage inflicted. 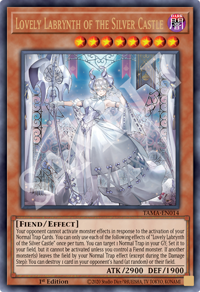 TAMA-EN014 Lovely Labrynth of the Silver Castle
Level 8 DARK Fiend Effect Monster
ATK 2900
DEF 1900
Your opponent cannot activate monster effects in response to the activation of your Normal Trap Cards. You can only use each of the following effects of “Lovely Labrynth of the Silver Castle” once per turn. You can target 1 Normal Trap in your GY; Set it to your field, but it cannot be activated unless you control a Fiend monster. If another monster(s) leaves the field by your Normal Trap effect (except during the Damage Step): You can destroy 1 card in your opponent’s hand (at random) or their field. 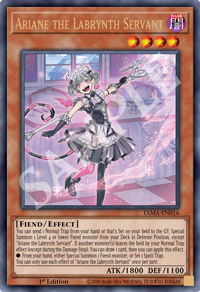 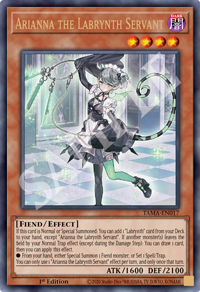 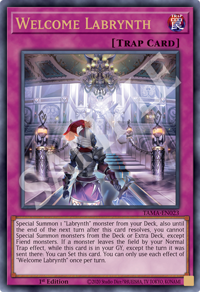 TAMA-EN023 Welcome Labrynth
Normal Trap Card
Special Summon 1 “Labrynth” monster from your Deck, also until the end of the next turn after this card resolves, you cannot Special Summon monsters from the Deck or Extra Deck, except Fiend monsters. If a monster leaves the field by your Normal Trap effect, while this card is in your GY, except the turn it was sent there: You can Set this card. You can only use each effect of “Welcome Labrynth” once per turn. 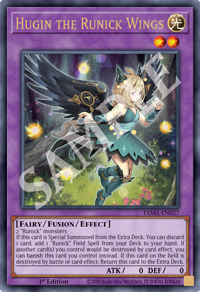 TAMA-JP037 Hugin the Runick Wings
Level 2 LIGHT Fairy Fusion Effect Monster
ATK 0
DEF 0
Materials: 2 “Runick” monsters
If this card is Special Summoned from the Extra Deck: You can discard 1 card; add 1 “Runick” Field Spell from your Deck to your hand. If another card(s) you control would be destroyed by card effect, you can banish this card you control instead. If this card on the field is destroyed by battle or card effect: Return this card to the Extra Deck.