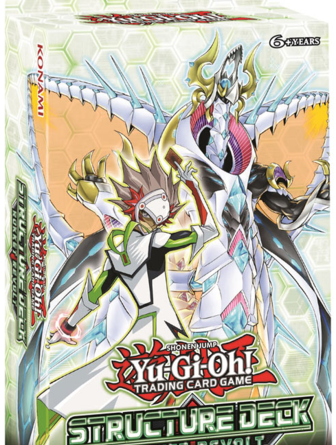 bang bang
Strucutre Deck: Rokket Revolt is available at stores at your local gaming store today, and will be available at all major retailers tomorrow!

Varis’ (also known as Revolver in the Japanese anime) “Rokket” strategy from Yu-Gi-Oh! VRAINS is built on low-Level DARK Dragons that replace themselves on the field during the End Phase of the turn they’re destroyed. Many of them can also destroy themselves along with cards your opponent controls if they’re targeted by a Link Monster’s effect, like the mighty Borreload Dragon, included in this Deck!

The “Rokket” strategy uses 2 different kinds of Extra Deck monsters: The Dragon “Borrel” monsters and the Cyberse “Topologic” monsters. Both themes have produced some of the strongest Extra Deck monsters in the game, and both receive new weapons to add to their arsenal in Structure Deck: Rokket Revolt!

Previous “Topologic” monsters have wiped out just monsters or just Spells and Traps, but the brand-new “Topologic” monster banishes everything on the field – and then returns itself to the battle next turn. You can also complete the set of “Borreload” monsters with a destructive new “Borreload” Fusion Monster to go with Borreload Savage Dragon from Savage Strike and BorreloadeXcharge Dragon from Rising Rampage.

Structure Deck: Rokket Revolt prioritizes Link Summoning, but it can also make use of Fusion Summoning with a new Spell that destroys its Fusion Materials instead of just sending them to the Graveyard. You can expand the Deck’s capabilities to include Synchro and Xyz Summoning with cards from Savage Strike, Dark Neostorm, and Rising Rampage, or just enjoy the expanded 6-card Extra Deck included in the box.