Warning:
Not all information has been completely documented, and should not be taken as final word. The following format is a casual heavy format, designed chiefly for fans of the cartoon series.

The following is for stores’ private use and they are not to be redistributed to the general public. So don’t expect to be able to get your hands on these cards.

– The Boss’s Deck is 8 Cards
– During the Draw Phase, the Boss returns all cards in their Graveyard to their hand and conducts their normal Draw
– The Boss does not lose if they cannot draw a card.
– Boss cards cannot be banished, they’re destroyed instead
– The Boss has 8000 Life Points times the Number of players they’re facing.
– A Special Win Condition is treated as inflicting 8000 damage to the Boss.
– Each player has their own field. Their Graveyards, banish piles and Extra Decks are treated as seperate.
– If a card mentions targetting, you can target any other player, but only if it doesn’t mention “Your side of the field” or “you control”.
– As for card costs, you can only use your own cards and not use your fellow players’ cards.
– Cards with Start are in the Boss’s staring hand (the remainder are placed in the Deck in the specified order.)
– A Boss can Summon an infinite number of times per turn.
– Non-Boss Players can discuss their hands and Set cards amongst each other.
– Set cards can be activated during all player’s turns.
– Non-Boss Players who lose send their entire field to their grave, the rest stays as it is (e.g. hand). If they recover in the duel, the resume their previous player order (Player B returns to being Player B)
– You cannot activate effects in response to a player losing(?)

Player Special Abilities (These can be used once per Boss Duel, the player whose turn is after the Boss’s turn currently can use these abilities, and only 1 ability can be used per turn):
– Player Rebirth: 1 Non-Boss Player gains 4000 Life Points. If that player has 0 Life Points, they can rejoin the Duel.
– (Precious) Card: Instead of conducting this turn’s Normal Draw, all non-Boss players choose 1 card from their Deck and add it to their hand
– Double: All Non-Boss Players’ monsters have their ATK doubled during this turn’s battle phase.

The above may or may not be the hidden ability of Pegasus / Spell A. 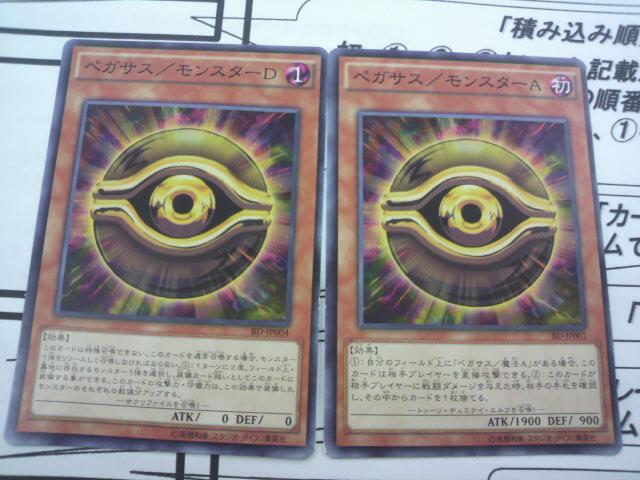 BD-JP001 Pegasus / Monster A
(Starting Hand) Effect Monster
ATK 1900
DEF 900
(1): If you control “Pegasus / Spell A”, this card can attack your opponent directly.
(2): When this card inflicts battle damage to your opponent: Look at your opponent’s hand, and if you do, discard 1 card from it.
-I Summon Toon Gemini Elf!-

BD-JP002 Pegasus / Monster B
(Starting Hand) Effect Monster
ATK 900
DEF 1400
(1): If you control “Pegasus / Spell A”, this card can attack your opponent directly.
(2): When this card inflicts battle damage to your opponent: Target 1 card in a Graveyard; return it to the Deck.
-I Summon Toon Masked Sorcerer!- 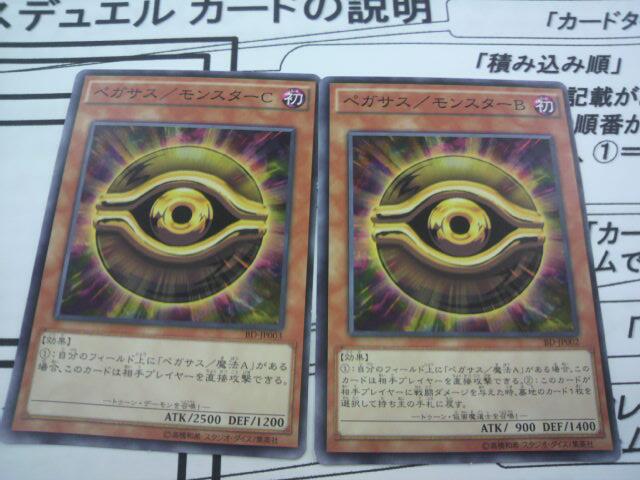 BD-JP004 Pegasus / Monster D
(1st Card in hand) Effect Monster
ATK 0
DEF 0
This card cannot be Special Summoned. If you Normal Summon this card, Tribute 1 monster to do so.
(1): Up to twice per turn: You can target 1 monster on the field or in a Graveyard; equip it to this card as an Equip Card. This card gains ATK and DEF equal to the ATK and DEF of a monster equipped to it by this effect.
-I Summon Relinquished!-

Boss Duel Rule:
(2): This card cannot be destroyed by battle, when you would take damage due to this card battling, inflict the same amount to your opponent. 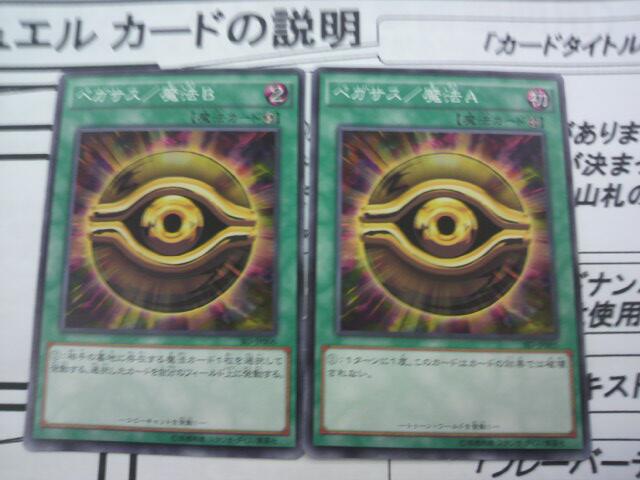 BD-JP005 Pegasus / Spell A
(Starting Hand) Field Spell Card
(1): Once per turn, this card is not destroyed by card effects.
-I activate Toon World!-

(Second Card in Deck) Quick-Play Spell Card
(1): Target 1 Spell Card in your opponent’s Graveyard; activate it on your side of the field.
-I activate Doppelganger!- 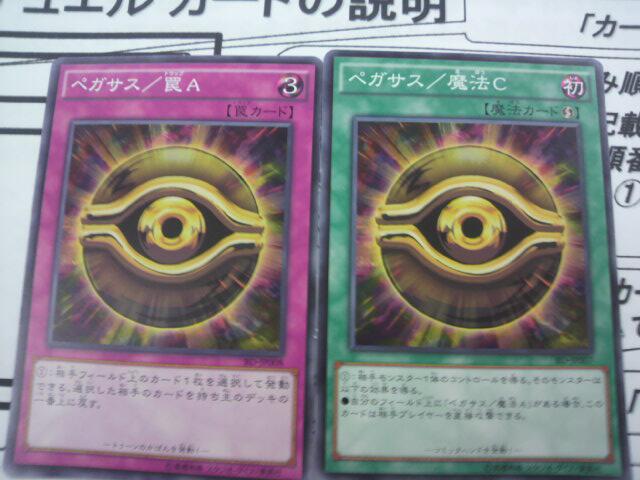 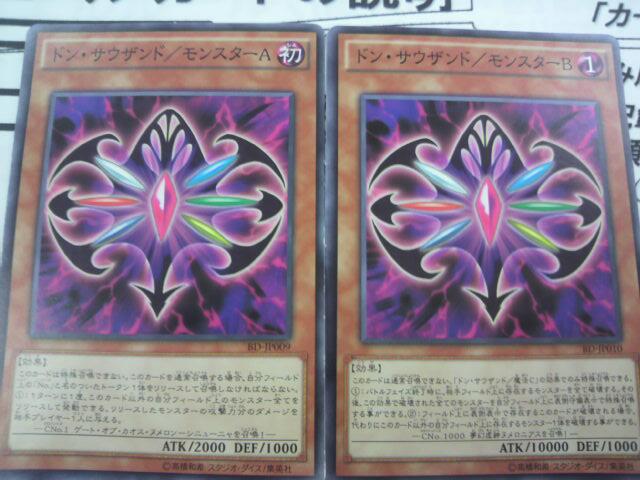 BD-JP009 Don Thousand / Monster A
(Starting Hand) Effect Monster
ATK 2000
DEF 1000
Cannot be Special Summoned. If you Normal Summon this card, you must Tribute 1 “Number” Token you control to do so.
(1): Once per turn: Tribute all monsters you control, except this one; inflict damage to 1 player eequal to the combined ATK of the Tributed monsters.
-I Summon Number C1: Gate of Chaos Numeron Shunya!-

BD-JP010 Don Thousand / Monster B
(First Card in Deck) Effect Monster
ATK 10000
DEF 10000
Cannot be Normal Summoned/Set. Must be Special Summoned by the effect of “Don Thousand / Spell C”, and cannot be Special Summoned by other ways.
(1): When the Battle Phase ends: Destroy all monsters your opponent controls, then, Special Summon to your side of the field all monsters destroyed by this effect in face-up Defense Position.
(2): If this face-up Attack Position card would be destroyed, you can destroy 1 other monster you instead.
-I Summon Number C1000: Numerronius!- 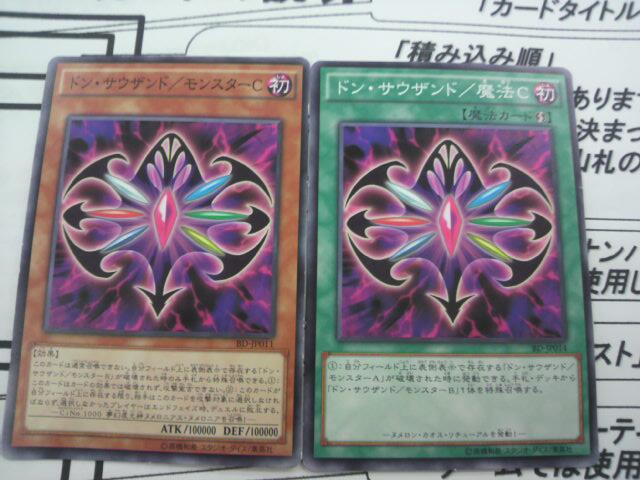 BD-JP011 Don Thousand / Monster C
(Starting Hand) Effect Monster
ATK 100000
DEF 100000
Cannot be Normal Summoned/Set. You can only Special Summon this card (from your hand) when “Don Thousand / Monster B” is destroyed, and cannot be Special Summoned by other ways.other ways.
(1): This card cannot be destroyed by card effects and cannot declare attacks.
(2): Your opponent must target this card for an attack if able. If a player didn’t choose it as an attack target, during their End Phase, they lose the Duel.
-I Summon Number Ci1000: Numerronius Numerronia!- 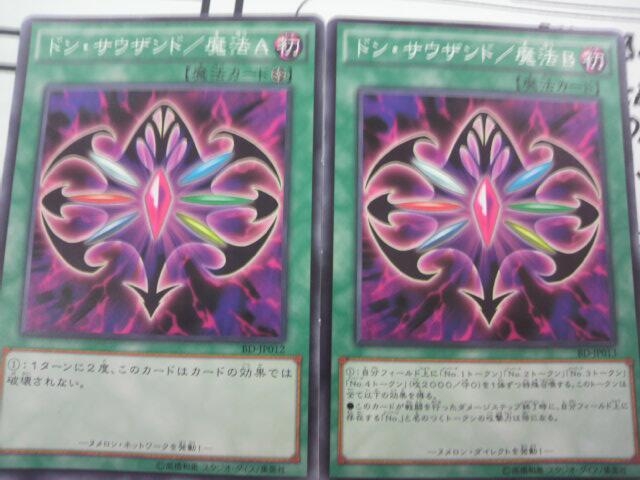 Boss Duel Rule:
(2): During either player’s turn, if you control no other cards: You can send 1 Spell or Trap Card from your Deck or hand to the Gravveyard: This card gains that cars’s effect. 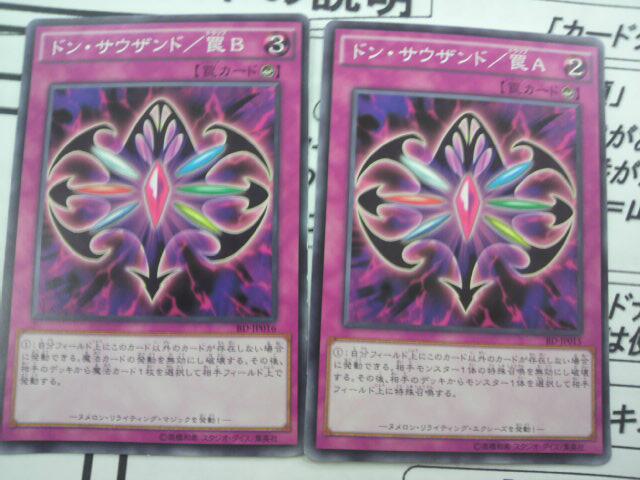 BD-JP016 Don Thousand / Trap B
(Third Card in Deck) Counter Trap Card
(1): If you control no other cards, when your opponent activates a Spell Card: Negate that activation, and if you do, destroy that card, then, choose a Spell Card from your opponent’s Deck and activate it on your opponent’s side of the field
-I activate Numeron Rewriting Magic!-