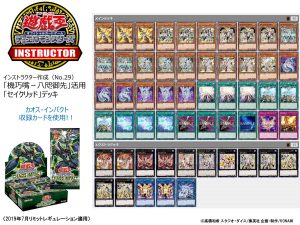 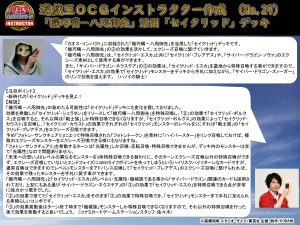 By using the 2nd effect of “Gizmek Misaki, the Avian Apex Ascender”, you can more easily Xyz Summon.

“Gizmek Misaki, the Avian Apex Ascender” can also be used as Xyz Material for “Constellar Pleiades” and “Cyber Dragon Nova”.

A “Constellar” Deck that’s changed due to the hidden possibilties offered by “Gizmek Misaki, the Avian Apex Ascender”.

However, during the turn you activate “Photon Sanctuary”, you cannot Summon monsters except LIGHT monsters, but this is not a problem as every monster in this Deck is a LIGHT monster.

“Message in a Bottle” lets you Special Summon 3 monsters with different Levels, however you cannot Special Summon any further, except by Xyz Summon, and if you’ve failed to Xyz Summon, during the End Phase, you lose 4000 LP, making this a very very High Risk, High Reward kind of card, so it’s suggested you Normal Summon a Level 5 monster via Tribute Summon to Xyz Summon “Constellar Pleiades”, then use its effect to return the remaining monster to the hand.

Until the end of the turn after its 3rd effect is activated, you cannot Special Summon monsters except Machine monsters, so it’s best to save activating this until you’re done Special Summoning everything else. 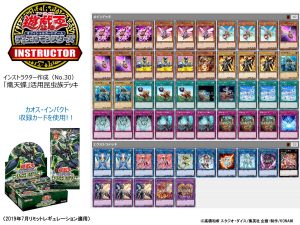 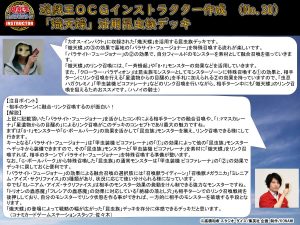 An Insect Deck that uses “Seraphim Papallion” from “Chaos Impact”.

The 3rd effect of “Seraphim Papallion” Special Summons “Fusion Parasite” from the GY.

With the second effect of “Fusion Parasite”, you use the monsters you control as materials to Fusion Summon.

You can Link Summon “Seraphim Papallion” with the effects of “Summoning Swarm” and “Battlewasps”.

Being able to Fusion and Link Summon during your opponent’s turn is utterly fascinating.

As above mentioned, this Deck’s concept is extremely charming as it’s built around being able to, during your opponent’s turn, Fusion Summon with “Fusion Parasite”, and Link Summon with “World Legacy Awakens” and “I:P Masquerena”.

Also, the Insect Normal Monsters Special Summoned with “Giant Ball Park” can be returned to the Deck with the 2nd effect of “Inzektor Picofalena”.

The effect of “Fusion Parasite” allows you to Fusion Summon “Invoked Raidjin”, “Invoked Magellanica” and “Millennium-Eyes Restrict”, so pick the one that is most useful depending on the situation.

Among them, “Millennium-Eyes Restrict” is a VERY strong monster that can activate its effect even during he opponent’s turn.

“Traptrix Mymerleo” and “Traptrix Rafflesia” let you use “Break Off Trap Hole” if you Link Summon during the opponent’s turn, so aim to have all of your monsters Linked while being able to destroy the opponent’s monsters.

I feel the tactics available to Insect Decks have broadened with the appearance of “Seraphim Papallion”.