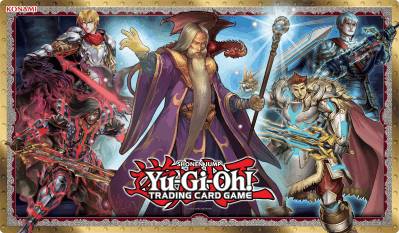 The Noble Knights of the Round Table Box Set will collect the various Noble Knights cards that have been appearing in booster sets for the past two years, and boost the popular Deck theme with new key cards. This release will include “Merlin,” the wizard of Arthurian legend, and the card has the power to take a Noble Knight card and make it a leader of men. The deck will also include a new Noble Knight monster and a new Spell card. Another highlight is the three-card Power-Up Pack, which will include three Platinum Rares from the following six-card set: “Compulsory Evacuation Device,” ”Effect Veiler,” “Forbidden Lance,” “Gold Sarcophagus,” “Mystical Space Typhoon,” and “Torrential Tribute.”

The box will contain a 43-card, pre-constructed, all Platinum Rares deck, an all-foil three-card Power-Up Pack, a rubber game mat, 70 new Round Table-themed card sleeves, and a storage box. MSRP is $49.99.

Noble Knights of the Round Table Box Set