Kind of random smorgasbord of information.

A 20th anniversary related “Yu-Gi-Oh!” cafe will be opening in Japan between April 2nd and May 31st. It’s a collab between Anime Plaza and the Yu-Gi-Oh! Franchise.

Anime Plaza is a cafe that specializes in anime related dishes that runs varying themes. 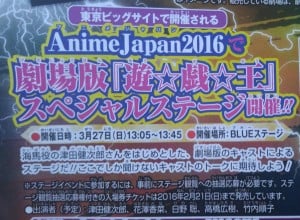 At the Tokyo Big Site (a major convention center in Japan), at the Anime Japan 2016 convention on March 27th, at 1:05 to 1:45 PM JST there will be a Special Stage event related to the Dark Side of Dimensions movie. 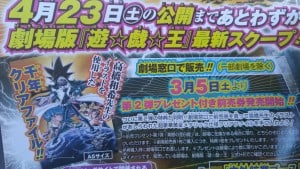 The second Pre-Order bonus is announced: An A5 Size Plastic Folder called “Millennium Clear File” will be available to those preordering from March 5th, 2016 onwards.