So when the new list was posted up a couple of weeks ago i saw that Fire Fists and Mermails got nipped some to where having that 1 Wolfbark, 1 Rekindling or that 1 Abyssgunde becomes more important to use more carefully and take different directions with the deck. With the new format now here I’ve been seeing a lot of people running Bujins, Pure Geargias, Dragon Ruler variants, Dual-Axis Fire Fists and other decks. It had me wondering why there aren’t a lot of people running Harpies.

I hear a lot of people say it’s inconsistent, loses to itself, doesn’t get free summons and many other things which i don’t think is all true. I think Harpies Pre-PRIO can be a good deck to run since this is still another back row format. They have enough speed to end the duel quickly before your opponent sets up and controls the game if they keep searching out things from their decks. There’s 2 ways of running this deck like you can go with the Harpie’s Pet Dragon route to have access to Rank 7 monsters such as Mecha Phantom Beast Dracossack, Number 11: Big Eye and Number 74: Master of Blades or using the Rank 4 build with no Harpie’s Pet Dragon but with Summoner Monk. You can pitch a Hysteric Sign or any other spell to special summon a Harpie Dancer to get that going if you have Harpie’s Hunting Groud in play, any other Harpie monster or even a Blackwing – Zephryos the Elite to make a Rank 4 XYZ monster depending on the situation. You could always bring Zephryos back from the graveyard to the field by returning cards like a face-up Fiendish Chain, Hysteric Party, Hysteric Sign, Mistake, Harpie’s Hunting Ground and others, then either activate them again or just set them again. It’s really neat what things you can do with Summoner Monk.

What makes Harpies good and a contender for the beginning of the format?

Well they have 4, if not 5 key cards to the deck: Harpie’s Hunting Ground, Hysteric Sign, Hysteric Party, Harpie Channeler and Lightning Chidori. 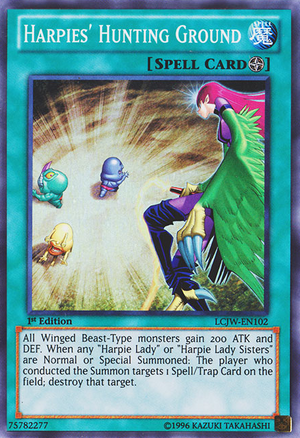 1) Harpie’s Hunting Ground is to help clear out your opponent’s spells and traps. Harpie Dancer just makes it that much better by not only letting you destroy 1 spell or trap (If your summon isn’t negated and your effect goes through to return it or another WIND monster back) but 2 spell or traps if your second normal summon goes through. Be it that they Mystical Space Typhoon or Dust Tornado your HHG upon that summon hey that’s one less card you have to worry about when you flip up that Hysteric Party. You can always search out another one via Harpie Queen. 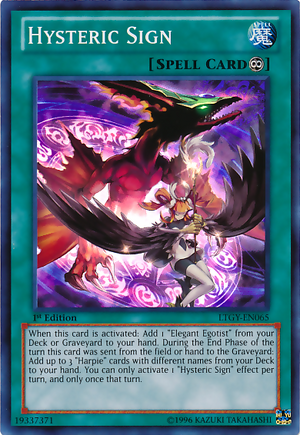 2) Hysteric Sign does 2 things for you: Lets you add an Elegant Egotist from your deck or graveyard to your hand and when it’s sent from your hand or field to the graveyard at the End Phase of that turn you can search out your 3 main Harpies (Queen, Channeler and Dancer) to give yourself another play for your next turn. You basically just have to remember that you can only activate one of those effects once per turn and only once that turn. So whether you discard it for Hysteric Party or it gets destroyed by a card effect from either player you’re going to search out your monsters either way. If you have this with Elegant Egotist in hand while having a Harpie Lady card on the field and targets left in the deck or hand you can basically use Elegant Egotist twice that turn to make XYZ monsters to put you in a better spot. 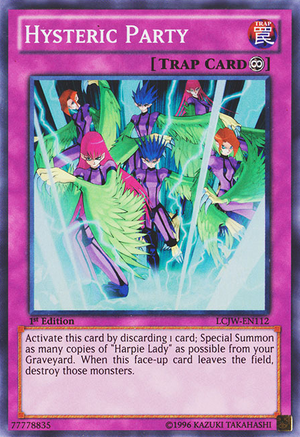 3) Hysteric Party is the nuts and a reason why this deck is still good. It’s basically this decks version of Rekindling but it can be more worthwhile depending on how you use it. You discard a card from your hand to activate it which means you can discard any card from your hand whether it be a Harpie monster that will be summoned from Party, Hysteric Sign that will let you search out more harpies at the End Phase, a dead card in your hand or a Blackwing – Zephyros the Elite which you can use to return back that Hysteric Party once you finish your play so no other Harpie monster gets destroyed because it being leaving the field. Like after your opponent uses cards to get over or rid of your monsters they now have to deal with them again being brought back by this card. 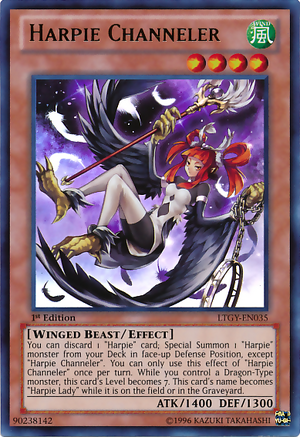 4) Harpie Channeler is like the best monster in the deck that makes it pretty good because you have the ability to special summon a Harpie’s Pet Dragon from the deck to make a Rank 7 XYZ monster like Dracossack or special summon a level 4 Harpie monster to make a Rank 4 XYZ monster to help you depending on the situation you’re in. Also with Hysteric Party when bringing back just one of these with other Harpies you can XYZ summon a Queen Dragun Djinn then use its effect to special summon a Harpie’s Pet Dragon from your graveyard to the field then overlay both Pet Dragon and Channeler to XYZ summon a Rank 7 monster which just offers you a different route if any other play doesn’t put you into a good position. 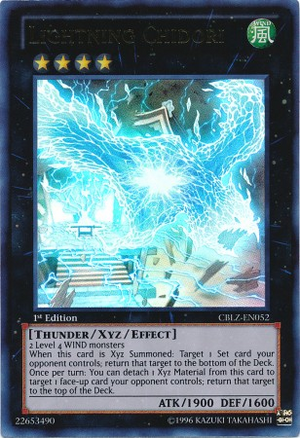 5) Lightning Chidori is the XYZ monster than makes this deck even better. Being that you need 2 Level 4 Wind Monsters to make it, this deck has no problem bringing that bird out. Its first effect “When this card is XYZ summoned: Target 1 set card your opponent controls; return that target to the bottom of the Deck.” is really good right now because a lot of decks are setting cards and you’re either sending back a key set monster like Geargiarmor, Mermail Abysslinde along with spell and traps or you’re forcing them to activate their cards like Geargiagear and Abyss-sphere. Its second effect “Once per turn: You can detach 1 XYZ Material from this card to target 1 face-up card your opponent controls; return that target to the top of the deck.” is also good because you can return monsters to the top of the deck like XYZs, Synchros, Effect or Normal Monsters to help clear up the field so you can attack or be in a better position.

YCS Las Vegas is this weekend and with Mermails, Bujins, Pure Geargias, Fire Fists taking most of the Top 32 of YCS Mexico this past weekend i really think this deck is a sleeper for this event. Why? Well lets see:

Pure Geargia and Fire Fists are your easiest match ups because they both set a lot of traps to where your Hunting Ground will put in a lot of work to clear those out. Fire Fists don’t really have a huge come back play outside of their solo Coach Soldier Wolfbark or Rekindling so staring down a Hysteric Party is pretty scary especially after you’ve lost your back row from Hunting Ground. With Gears at least you have the Geargiagear and Armor combo to try to Exciton or 101 to make an attempt to come back but even then you should win the duel by then with the amount of speed this deck has. Side cards like Black Horn of Heaven and Trap Stun come in handy against these decks because they help push your Harpie spam and get rid of their XYZ monsters they’re forced to make with their monsters. Lightning Chidori also puts in work against both decks back siding back set spell, trap and monster cards. Sending back a Geargiarmor can be pretty sick. Also you can always bring out a Number 74: Master of Blades to put pressure on them if you run the build with Harpie’s Pet Dragon since cards like Bear, 101, Dimensional Prison, Diamond Dire Wolf, etc target and he can not only negate those effects but also destroy 1 card on the field (Your opponents cards or like your own Sign too). With him having 2700 attack it’s pretty hard for them to get over that. 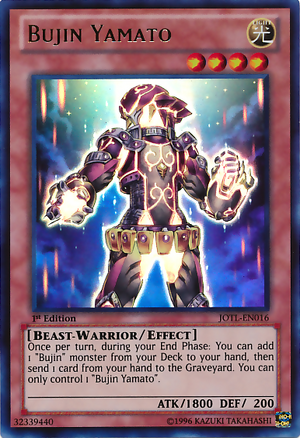 Bujins is an annoying match up because you gotta play with their in grave Turtles and Hares but it’s doable. Once you get past that you should be in the clear to win that game. Be it that they have Bujincarnations to come back with, you also have Side cards like Black Horn of Heaven to take care of that. Also Mistake pretty much shuts down their deck until they draw an out for it like MST, Dust Tornado or Royal Decree.

Mermails is probably the tougher match up for this deck because their set back rows are ones that can be chained which is not something you wanna pop a lot but they’ll strive to get their Mermail Abysspike, add Genex Undine then later summon that to dump Tidal and add Controller to hand. They go for their Leo, the Keeper of the Sacred Tree play which can be a pain to get rid of as well as Mermail Abyssgaios. Luckily enough you have cards like Dark Hole to get rid of both monsters, Ice Beast Zerofyne and Evilswarm Exciton to get rid of the Leo, Book of Moon and Icarus Attack to get rid of the Gaios. Though you run Reckless Greed, you have Hysteric Sign to search your 3 main cards for your combo play and Elegant Egotist which you can use as well. Also remember you have Mistake in the side which pretty much cripples the deck along with Soul Drain and Abyss Dweller. Maxx “C” also puts them in an awkward spot when they are trying to make a play or push. 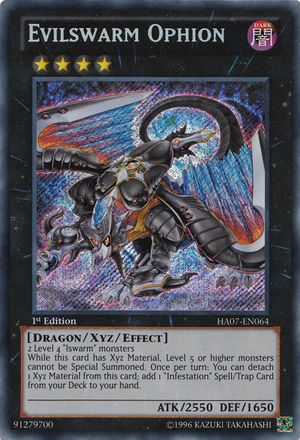 For the Evilswarm match up, just tell yourself that this isn’t real as one of my favorite duelists once said. I mean their 5-6 Lance’s don’t do much for them against this deck and Hunting Ground just tears apart their back rows. Dark Worlds, Mythics, Hieratic Rulers shouldn’t be much of a problem but Skill Drain can be pretty devastating to this deck if not taken care of so making Number 85: Crazy Box can really help you out while Skill Drain is up. Luckily Cyber Harpie Lady can pop it when summoned and you also have Mystical Space Typhoons to help you out. Also against Hieratic Rulers you can always make an Abyss Dweller to stop the Hieratic monsters from gaining their effects to special summon a normal Dragon-Type monster when they activate from the graveyard and stop Dragon Rulers from special summoning from the graveyard too.

This is something i’d take to YCS Las Vegas or at any Regional event. There isn’t much you can side against this deck outside of spell or trap destruction but even so hitting a set Hysteric Sign or Reckless Greed really sucks. True they can hit your HHG, freshly activated Sign or Party if they preserve them. Anyways, i hope this article helps give players some insight on considering this deck before we get PRIO.

I'm a EDM junkie who has been playing this game since 2002 and i like to test a lot. 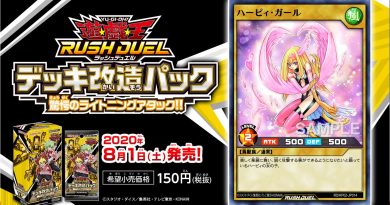 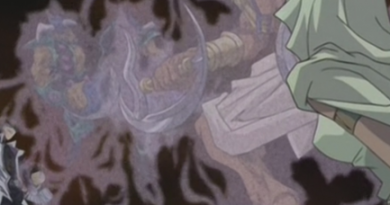