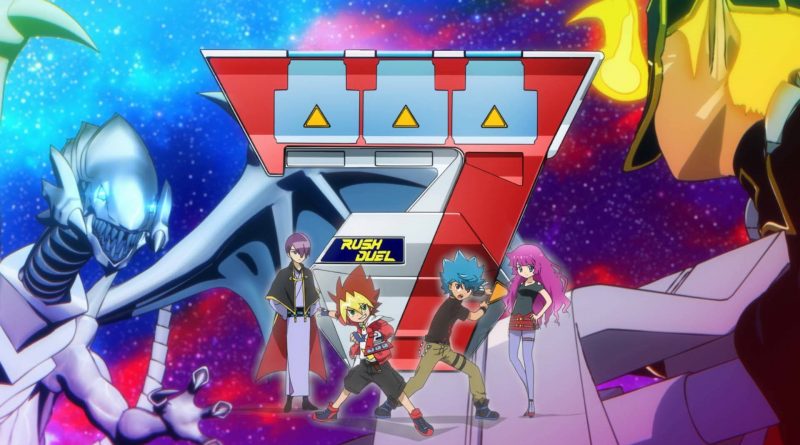 So no, Yuga’s new Dueling method isn’t without its drawbacks. 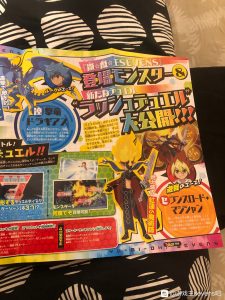 Sevens Road Magician
The Blazing Crimson Magician
Yuga’s Ace
A Magician whose hair is lit aflame. “Jump Festa 2020” is revealed him facing off against the legendary monster “Blue-Eyes White Dragon”, using the sword in his left hand.

Rush Dragon Dragears
Luke’s Ace
A giant Dragon used by Luke. Does its name imply it’s a monster that can attack multiple times? Be sure to enjoy watching it face off with Yuga’s Magician in a battle of aces! 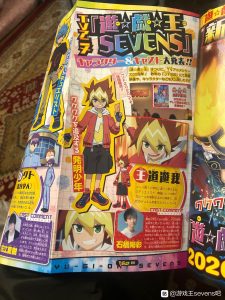 Ohdo Yuga
The Young Inventor Who Pursues Excitement
A Duelist who’s also a 5th grader at Goha 7th Elementary. He’s great at tinkering with machines and inventing new rules, and currently aims to change the way Duels are done.

Ishibashi Hiiru: Cast Comment
When I was in Elementary School, I watched Yu-Gi-Oh! in the evening. When I heard I would be appearing in such a memorable series, I was so happy, and I want to do my best! This series will be the memorable 20th annivesary series of “Yu-Gi-Oh!”, so I’ll do my best!! 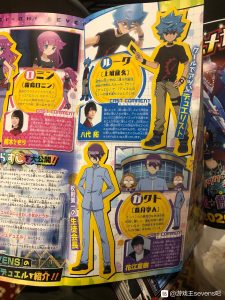 “Rook”(*) (Kamijo Tatsuhisa)
The Cool Hot-Blooded Duelist
A classmate who goes to the same school as Yuga. He seeks to become the “King of Duels” with the Rule Set that Yuga invented, “Rush Duels”.

* His Nickname is likely based on his name, which includes Castle and the Kanji for Dragon used to refer to a promoted Rook)

(It could be Luke, we’ll need to wait and see)

Yashiro Taku: Cast Comment
For me, the “Yu-Gi-Oh!” series is very much on my mind, and I’m really glad to be able to perform as part of the milestone 20th anniversary of the animated TV series. I can’t measure what this series has meant to me in its 20 year long history, so I hope I can give back, including to the new generation.

“Gakuto” (Sogetsu Gakuto)
The Rules First Student Council Member
A serious straight-laced student council member of Goha 7th Elementary. He’s strict about school rules and cracks down on troublemakers, but he’s generally at a loss with what to do about Yuga.

Hanae Natsuki: Cast Comment
I’m very happy to be able to perform in YGO again after my bit in ‘ARC-V’ because I was enamored with YGO during my middle school years. Since it’s the 20th anniversary of the anime, I’m going to challenge the voice recording with my all, I hope everyone looks forward to it! 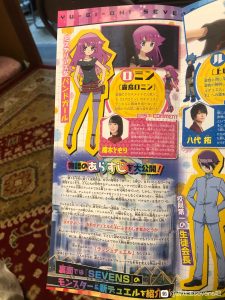 “Romin” (Kirishima Romin)
The Mysterious Band Girl
A classmate of Yuga’s who is the guitarist of the popular band “Roaromin”. She isn’t interested in Dueling, but keeps showing up wherever Yuga andd his pals go.

Kusunoki Tomori: Cast Comment
Pleased to make your acquaintance. I’m Kusunoki Tomori, who will be playing the role of Kirishima Romin. Because this is such a popular franchise, I think everyone’s expectations are greater than I can possibly imagine. In order to meet those expectations and let everyone enjoy the show, I plan to do the best I can, so thank you.

Ohdo Yuga, who attends Goha 7th Elementary, is a 5th grader who spends his time following his own ‘road’, inventing inventions he calls “Roads”. Yuga, fed up with the stifling rules Adults have placed on Duels, creates new rules that let you go all-out in a Duel from the very start. However, Yuga finds he’s unable to install the data needed for these new rules into his Duel Disk. Yuga’s tried to install them plenty of times, but he keeps running out of time and gets penalized.

But then one day, Rook, the self proclaimed “#1 Duelist of Goha 7th Elementary”, stops Yuga while he’s on the way to his lab, and tells him about the rumor of a “King of Duels”. What awaited the curious boys when they arrived at a major monument was a mysterious person!

“Try, if you dare… And see if you are worthy of being a King of Duels…”

If he could just install his new rules, Yuga could be recognized as a King… … but if he installs them, he’ll have to beat his opponent within a limited amount of time!

“In that case, I’ll Rush Duel, the Road I invented!”

Yuga and Rook, these two young boys are about to begin their story as they try to change a stuffy, suffocating world with a brand new way of Dueling!!