Gagagas are the premier Xyz archetype that debuted in Generation Force. Now that the ZEXAL era is ending, let’s take a look at how they’ve matured.

Why would you run Gagagas? Ever wanted a deck that can run any generic, 2-material Xyz Monster in the game?  The Gagaga Extra Deck is packed with some of the strongest monsters of each Rank. Let’s take a look at a typical Gagaga Extra Deck. 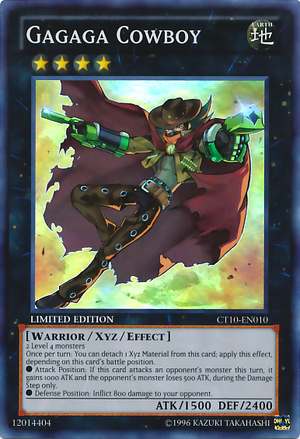 Don’t forget about Gaia Dragon the Thunder Charger, Downerd Magician, Ghostrick Alucard, or Herald of Pure Light. There are so many good monsters that its hard to choose which you can afford to not use. While most themes focus around a small range of Ranks, Gagagas are the only theme that can theoretically access any Rank in the game.

Each Gagaga monster either summons itself in some way, or manipulates Levels in order to set-up a variety of Xyz plays. The deck basically tries to set-up with a first turn Felgrand, or a Rank 6 to control the game. Otherwise it falls back upon defensive Rank 4s and 2s. The rest are to give you a variety of options for any situation. You can abandon Rank 3s, 2s, and 1s altogether, but the options are there if new must-have Xyz of those Ranks become available. The Gagaga goal is to toolbox your extra for some of the most powerful Xyz to control the game. 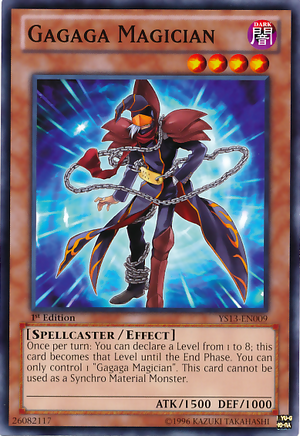 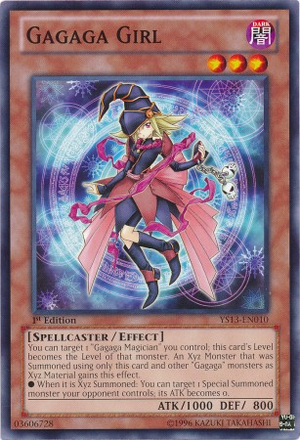 Gagaga Magician and Gagaga Girl are homages to the Dark Magician and Dark Magician Girl. As such, they’re the closest thing you’ll get to having those iconic Spellcasters as win conditions in your deck. Together, Magician and Girl get you any Rank between 1-8. A favorite trick for any Gagaga player is the Machu Mech OTK. Gagaga Girl reduces a special summoned monster’s ATK to zero, meaning that using her perfectly sets up the effect of Number 33: Chronomaly Machu Mech. If your opponent has a monster with 2700 or more attack that fits Machu Mech’s conditions, you can deal a full 8100 points of damage. You won’t always pull off that much damage, but Machu Mech can do over 4000 damage easily between its effect and attack score. While Gagagas lack the ability to flood the field, they make up for it with their access to heavy hitting monsters like Machu Mech, Volcasaurus, and Gustav Max. 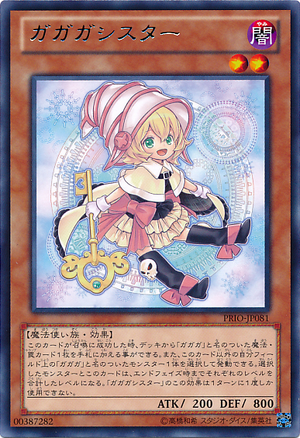 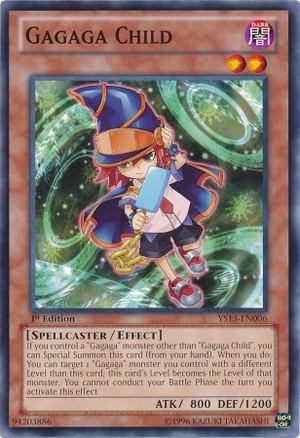 Gagaga Child and Gagaga Sister are another pair of important monsters. Child gives you ideal first turn plays with Magician, letting you grab any 2 Material Rank 1-8 Xyz you like. You might lose your chance to battle, but you can still remove threats with anything from Volcasaurus to Dracossack. Gagaga Sister is a perfect partner for any Gagaga monster. She changes Child’s level for him, giving you a Rank 4 without losing the battle phase. She reaches Level 5 with Girl to make Machu Mech and she also pairs with Magician to get Rank 9 and 10 Xyz Monsters.

However, what really makes Sister so important is that she allows you to Xyz Summon for no cost in card economy. She becomes a 1-card Xyz Summon by searching Gagagarevenge. She sets up future plays with Gagaga Acadamy Emergency Network. She can also act as spot removal by searching Gagagabolt. Revenge’s 300 ATK boost may seem small, but making a 3000 ATK Strike Bounzer, Norito, or M7 is nothing to scoff at, let alone a 3100 ATK Felgrand. There are plenty of other Gagaga Spells and Traps you could search but they aren’t anywhere near the caliber of these three. 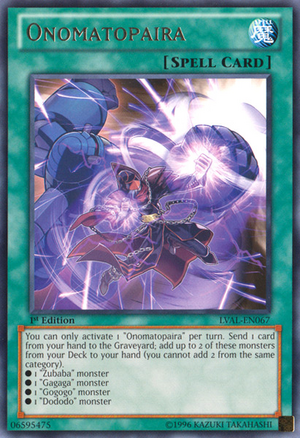 Onomatopaira is amazing. The discard lets you set up Gagagarevenge with a Magician or Girl in the grave, while getting you a Sister to search Revenge. However, Onomatopaira can only give you 1 Gagaga monster, so which Dododo or Gogogo should you use? Zubabas are out of the question so that leaves us with Dododo Buster, Dododo Warrior, or Gogogo Giant. Both Buster and Giant help set up an Xyz play so long as you have a corresponding monster in your graveyard to work with (note the discard helps with this). Buster is more flexible with its level, but Giant’s effect is easier to trigger. Why consider Dododo Warrior? Dododo Warrior does not conflict with Gagaga Network’s restrictions, and it lets you grab Rank 6s much easier with Gagagas than Buster does. It also stops Mermail Abysslinde, Brotherhood of the Fire Fist – Boar, and Gravekeeper’s Recruiter, and Fire King Avatar Yaksha, albeit rarely. Giant is an easier Rank 4, Warrior is an easier Rank 6, and Buster tries to be the in-between. Test them out and pick the ones you like the best.

There are more Gagaga monsters outside the Spellcaster ones. Gagaga Gardna, Gagaga Caesar, and Gagaga Clerk aren’t bad per se. Clerk is meant to work with Caesar to take advantage of higher Level cards you tech into the deck, like Tragoedia, Gorz the Emissary of Darkness, Dododo monsters, Cyber Dragon and Swordsman of Revealing Light. However, they aren’t necessary components on the same level as the other members. Gardna isn’t “bad” either, but the deck doesn’t need him. If you’re playing for fun, playing 1 of each won’t hurt you too much, but don’t be afraid to shop around for other cards that can make more use of the space. 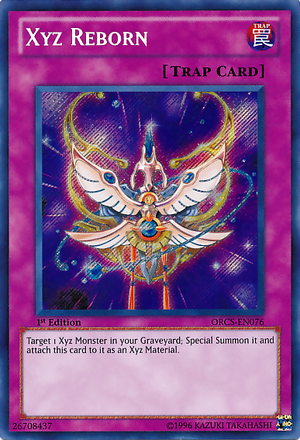 Things to take note of are the restrictions on Emergency Network. They are very relevant as they cut off revenge or Child plays when you use it. You only ever want to search a Girl or a Magician with it. It can clog, and can’t be used on the first turn of the duel, so you might consider just running 2 of it. Test both numbers and find which works best for you.

We’ve got 2 of each Dododo Warrior and Gogogo Giant in here to make sure Onomatopaira can stay usable later in the game, while giving us more diverse options to have at our disposal.

Dark Eruption lets you add Sister or Child to your hand, so that you can make the most use out of their effects, unlike Gagagarevenge. It can bring back any Gagaga Spellcaster, and is great in tandem with Gagagarevenge.

Wonder Wand and Dodododraw are other cards to consider. Wonder Wand works well with Sister or Child. Sister can search Gagagarevenge to revive herself after you Wand her away. Then summon any Childs you’ve drawn for a Rank 2 or 4 Xyz Summon. Dodododraw is an option if you run more Dododos, but too many of them can clutter your hand.

Xyz Reborn is fun late game. Being able to revive an Xyz Monster like Felgrand or Exciton Knight during an opponent’s battle phase, etc. can really turn the game in your favor. It can be a dead card, but this deck runs a lot of powerful Xyz Monsters that can control the game on their own. Its worth your consideration.

“Hand-trap” monsters are useful as well depending on the nature of the format, so don’t forget about them. Especially if you want to use Gagaga Caesar.

Gagagas have come a long way from relying on Mystic Tomato and Gagagaback combos. If you’ve got 2 Gagagas on the field, there’s no telling what Xyz they’ll pull out. Playing with them has been a great experience, so I hope this Gagaga Guide was useful to you. Please share your thoughts on the Gagaga Gang in the Comments below. Happy Dueling!