Basically, the cross promotion for the anniversary and movie continues.

“Puzzle Solving Battle City” is a stamp collecting event held throughout the park, where you need to solve puzzles and riddles to collect stamps. Those who complete their set of stamps get a copy of the new alternate art of “Obelisk the Tormentor” (Kaiba Corp Rare) and 1 of 3 different original stickers. The event occurs March 19th to April 3rd, April 9th, April 10th, April 16th, April 17th, and April 23rd to May 8th. 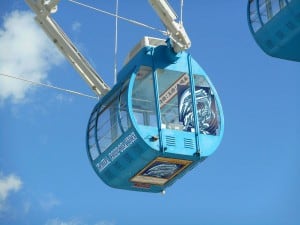 “Complete Exodia” is an game where you assemble the five pieces of Exodia and take a photo. The first twenty to show a photo with the hashtag #海馬ランド in横浜 get a present.

And it appears from 11AM to 8PM on April 23rd and 24th, there will be an event where you can get a Token card featuring you and Kaiba, seemingly: