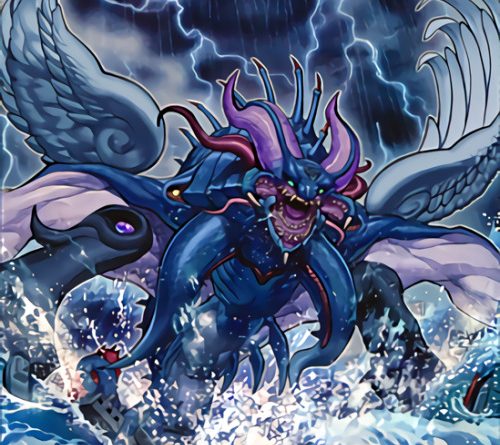 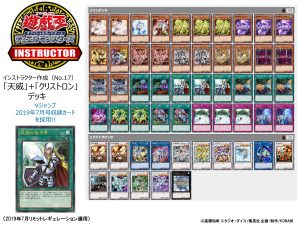 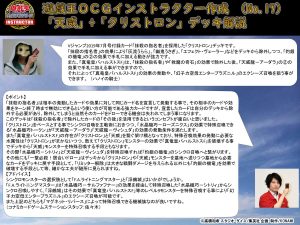 A “Crystron” Deck that uses “Crossout Designator” from the July 2019 issue of V Jump.

By banishing “Ash Blossom & Joyous Spring”, “Ghost Ogre & Snow Rabbit” and “Effect Veiler” from the Deck with “Crossout Designator”, you can later add them to your hand with the 2nd effect of “Vermilion Dragon Mech”.

Also, “True King Bahrastos, the Fathomer”, if banished by the effects of “Crossout Designator” or “Dwimmered Glimmer”, can be later added to your hand by the effect of “Tenyi Spirit – Adhara”.

From there you can activate the effect of “True King Bahrastos, the Fathomer” and Xyz Summon “Phantom Fortress Enterblathnir”.

“Crossout Designator” is a card that can be activated by declaring the same name of a card or effect of your opponent, negating that opponent’s card or effect until the end of the turn, making it an incredibly powerful card, but it requires you to banish from the Deck, and by banishing them, you lose the chance to draw into them.

This Deck that banishes cards with “Crossout Designator”, relying on the concept of “After it resolves”, strikes me as quite fascinating.

Elsewise, “Slash Draw” can send “Crystron” and “Tenyi” monsters to the GY, while returning your opponent cards to the Deck, while “Limiter Removal” can allow you to inflict massive battle damage, and allows “Vermilion Dragon Mech” to be destroyed, et al, et al.

You can see all the little pieces come together.

Also, since both are Machines, they’re good targets for “Magnet Reverse”.