The parade of the planets continues! This time with Edo Phoenix/Aster Phoenix’s Planet card from the Manga that he beat Asuka/Alexis with! 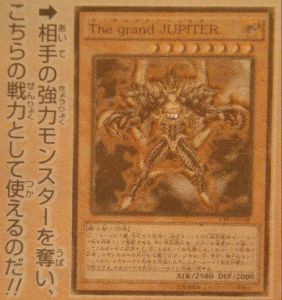 The Grand Jupiter
Level 8 DARK Warrior-Type Effect Monster
ATK 2500
DEF 2000
(1) Once per turn: You can discard 2 cards, then target 1 face-up monster your opponent controls; equip that target to this card. (2) This card gains ATK equal to the combined original ATK of the monsters equipped to it by its own effect.
(3) Once per turn, during the End Phase: You can target 1 monster equipped to this card by this card’s effect; Special Summon it.