Please bear with us about new card effects, the commercial cards are very tiny and hard to read. 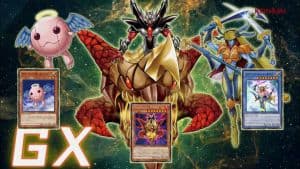 Cyber Petit Angel
Level 2 LIGHT Fairy-Type Effect Monster
ATK 300
DEF 200
You can only use the effect of “Cyber Petit Angel” once per turn.
(1) If this card is Summoned: Add 1 “Cyber Angel” monster or “Machine Angel Ritual” from your Deck to your hand. 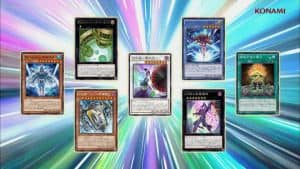 Numbers 78: Numbers Archive / Number 78: Number Archive
Rank 1 LIGHT Spellcaster-Type Xyz Effect Monster
ATK 0
DEF 0
Materials: {3?} Level 1 Monsters
(1) Once per turn, during either player’s turn: You can detach 1 Xyz Material from this card; you cannot Special Summon monsters for the rest of this turn, also your opponent chooses 1 random card in your Extra Deck, and if it is a “Number” monster with “Number 1” through “Number 99” in its card name, Special Summon it from your Extra Deck, by using this face-up card you control as the Xyz Material. (This Special Summon is treated as an Xyz Summon. Xyz Materials attached to this card also become Xyz Materials on the Summoned monster.) During the End Phase, banish the face-up monster Special Summoned by this effect.

Cardian – Yanagi ni Ono no Michikaze –
Level 11 DARK Warrior-Type Special Summon Tuner Effect Monster
ATK 2000
DEF 2000
Cannot be Normal Summoned/Set. You can Special Summon this card (from your hand) by Tributing 1 Level 11 “Cardian” monster you control, other than “Cardian – Yanagi ni Ono no Michikaze”.
(1) If this card is Special Summoned: Draw 1 card, then reveal it to your opponent. If that card is a “Cardian” monster, you can Special Summon it. Otherwise, send that card to the Graveyard.
(2) If this card is used as a Material Monster for a Synchro Summon, you can treat all the monsters being used as Materials for that Synchro Summon as Level 2 monsters. 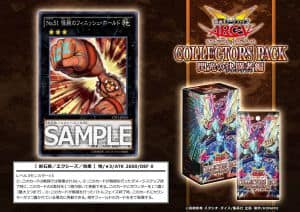 CPF1-JP024
Numbers 51: Kaiwan no Finish Hold (Unofficial Org Name: Number 51: Finish Hold the Amazing)
Rank 3 EARTH Rock-Type Xyz Effect Monster
ATK 2600
DEF 0
Materials: 3 Level 3 Monsters
(1) This card cannot be destroyed by battle.
(2) During the end of a damage step in which this card battles: You can detach 1 Xyz Material from this card; place 1 Counter on this card (max. 3)
(3) During the end of a Battle Phase in this card battles, if this card has 3 Counters on it: Destroy all cards your opponent controls.