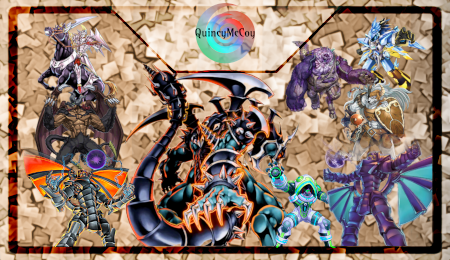 Even the classic combo deck can compete with updated engines!

Welcome back to another profile, this time taking on the modernization of the Tele-DAD strategy, famous for kicking off the Synchro era in style. With the release of Phantom Darkness in 2008, the DARK attribute got some of the craziest and most impactful support ever seen. Allure of Darkness let DARK duelists see more cards than ever, especially when paired with a Destiny HERO draw engine. Emergency Teleport was used to summon Krebons at the time, a DARK tuner, that easily unlocked access to the powerful Stardust Dragon. Waiting in the wings was the namesake of the deck, Dark Armed Dragon, ready to bust through any established board as long as you had exactly 3 DARK monsters in the GY. While this was amazing for the game back then, it’s time to modernize this classic Yugioh Deck and bring it out of the 2000s and into the 2020s.

Let’s start with the Psychic engine – nowadays, we have a much better tuner in the form of Psi-Reflector and the Assault Mode Activate package, as Reflector serves as a one-card Level 6-9 Synchro Summon. Plus, it’s still Psychic and thus synergizes well with Emergency Teleport. Next up, while Destiny HERO – Malicious has survived the cut, the rest of the Destiny HERO engine has been swapped out for a Magicians’ Souls engine, giving your deck a higher quantity of GY-able DARK monsters, more draw power, and more bodies on the field. Plaguespreader Zombie is also back, but this time he’s joined by Danger! Monsters for even more DARK shenanigans. And lastly, The Dark Creator joins the build while also being joined by The Chaos Creator and Chaos Nephthys (YGOrg Translation), both accessible through a variety of LIGHT monsters found in the Extra Deck or the 3 copies of Effect Veiler for disruption purposes. All together, this is my take on Tele-DAD as requested: hopefully you also feel like this is a great modernized version of the deck, still relying on Synchro monsters as the win condition, but loving every second of controlling the field and duel with the power of the Phantom Darkness!

Note: This is continuing the style of Creative Deck Profile articles, designed to showcase a build through replays and an attached summary. If you wish to see a CDP for an archetype, theme, or strategy you love, feel free to private message me on the YGOrg Discord server, the comments section of any of my YouTube videos, or just post a comment in response to this article on our Facebook page with your ideas to keep under consideration! On most YGO-related communities my username is Quincymccoy, so feel free to reach out. Current pending requested profiles include: Yang Zing, Beetrooper. Some of my prior requests was covered by participants in CDSS6 and even more were re-covered in CDSS7, so I highly suggest checking those out and subscribing to my channel for all of my latest profiles on YouTube!